A Connection to the Vietnam Graffiti Project

The official insignia of the 22nd Infantry regiment.

The reunion I went to a few weeks ago was somewhat disappointing to me as I didn't get to see or meet or shake the hand of anyone that I actually knew and served with in Vietnam. That doesn't mean it was a bad reunion or that it wasn't a good worth while experience. There were many people I met there that I didn't know before. Like the artist I mentioned in an earlier post, Jim Nelson from Kansas. I gave a set of audio CD's I had made along with a DVD to Jim as he showed a genuine interest in the works. He wanted to pay me, but I declined. After all, I had the technical equipment to make the discs and the cost of the blank CDR's and DVDR's was nominal. Jim insisted and sent me some prints of his art work. I received them in the mail recently and I am grateful. They are beautifully done and describe a lasting memory of a young soldiers life, fighting in a war, in a land far far away. Jim also does other work and has painted many book covers and portraits over the years.

I also saw a couple of books that were for sale on the vending tables. There were baseball caps, license plate holders, T-shirts, polo shirts and button down denim shirts, all with the 22nd Infantry Society emblem printed or embroidered. Pins and patches for sale, and displays showing pictures and the written word, telling stories from the perspective of the author, who was another Veteran like myself. I believe someone had a scrapbook of pictures on the table. I put my pictures on a DVD along with audio that was sent to me ten years ago by a fellow I served with in 1969.

One of the books that was there was something called The Vietnam Graffiti Project. (This site is from Texas Tech and has pictures) These pictures were of the graffiti the soldiers scrawled on the canvas bedding while traveling to Vietnam on a troop ship. They were sent out of Fort Lewis Washington, near Seattle, where the reunion was held. The first members of the 22nd Infantry were sent over by boat. These guys are what we refer to as "The Originals". The original soldiers sent to Vietnam to fight from our unit, my unit.

I flew over. I was a replacement. These Warriors went over as a fighting infantry unit on a boat. The passage took about three weeks. There wasn't much to do aboard a troop ship carrying men to war. The bunks were close to one another in all directions. When the guy above you climbed into his bunk, it was literally a few inches above your face. Seems that much of the idle time was spent in the bunk and the soldiers wrote messages, thoughts, sayings, prose and drew pictures on the canvas undersides of these beds. 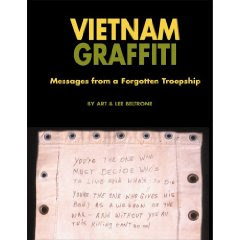 Someone found the ship, a hulk named The USNS Nelson M. Walker in a ghost ship yard in Virginia. The canvas remnants were saved and the graffiti then preserved in actual physical pieces and in the pages of this great book. Can be purchased at Amazon

This Sunday, November First, CBS Nightly News will present a story about the Walker and its graffiti. The story was filmed and produced at the reunion I attended. You can get More Information and I also posted a short article I found about The Vietnam Graffiti Project and I'll post it here:

The typical voyage from America to combat zones in Vietnam took 18 to 21 days. Confined to a ship in the middle of the Pacific Ocean with sleeping quarters so tight troops had little to no room to move leaves plenty of hours to occupy the mind.
How that time was spent by soldiers is the focus of the Vietnam Graffiti Project, an endeavor started 12 years ago in Keswick in Albemarle County by Art and Lee Beltrone.
"These stories, to us, are very, very important because before long, they're going to be lost," said Art Beltrone, a military historian.
The project began in 1997 when Beltrone found graffiti-inscribed berthing unit canvases from the former troop ship USNS Gen. Nelson M. Walker. At the time, the vessel was part of the Ghost Fleet in Virginia's lower James River.
Some of those canvases are part of the exhibition "Marking Time: Voyage to Vietnam," currently on display at the Virginia Historical Society as part of the museum's look at the Vietnam War era.
Many soldiers left their marks behind on those canvas hammocks where they slept, stacked four high so that "once you got in your cot . . . you had to lay flat on your back because the other guy was coming down and he was inches from your face," said William Painter of Goochland County, who rode the Nelson for his second tour of duty in Vietnam.
Beltrone wants to capture the personal stories of those transported by ship, not only in wartime but also in peacetime. The Vietnam War signaled an end to transportation by troop ships in America, a tradition that dated to the War of 1812, the historian said.
He has recorded experiences from more than 100 soldiers, obtaining audio files of the humorous, stressful or unique experiences aboard the ships. Since the exhibit opened at the historical society last month, he has received names of dozens of soldiers who want to share their stories.
He hopes to get more soldiers today during the Family Day Open House at the historical society on the Boulevard. As people examine the graffiti-lined canvases on the wall, they may get to hear first-hand what it was like sailing to Vietnam aboard a troop ship.
Vietnam veteran Calvin "Sandy" Humphrey of Richmond said he is going to be at the historical society today "to lend a face to the experience, as opposed to just people looking at pictures, reading exhibits."
Humphrey spent nearly 30 days aboard the USNS Gen. W.H. Gordon to make the trip from San Diego to offload in Da Nang, Vietnam. Like Painter, Humphrey didn't leave behind graffiti during his 30-day voyage. He did, however, mail a letter to his parents, chronicling aspects of his voyage.
"I think it's great to read soldiers' personal accounts or, more specifically, their letters home, to know what's going on in their lives -- what they might have been thinking," Humphrey said. "I think this falls right in line with that."
Both veterans said days on ship were filled with boredom, whiling away the hours. In port, soldiers weren't allowed off, unless it was for physical training on the dock. Time was filled by conversation or reading books. The soldiers even read the graffiti left by previous troops.
It was inevitable during those long hours on the ocean that thoughts wandered to the future and whether they would survive to return to the U.S. Humphrey wrote in his letter to family of watching the Golden Gate Bridge slip into the horizon and thinking then "if I, or we, would return."
"In a different sort of way, I wonder if the me that left came back. Was the person that left the same person that came back?" Humphrey said this week.
More than 40 years later, Beltrone is aiming to capture these heart-wrenching stories of a soldier's life on the way to war, with nothing but a vast, somewhat turbulent sea separating them from home.
"What makes it so poignant, I guess, is we were never welcomed home," Painter said. "I never told anybody but my immediate family that I'd been to Vietnam. It was . . . like you weren't welcome home; you were kind of shunned if you spoke it. It was hard to do that, after having spent two years in Vietnam."

Peace to all and a Happy Halloween.
Posted by Spadoman at 8:11 PM

I'll have to keep my eye out for that book.

thank you for your service.

(I owe you responses over at my place...I'll get to it this week.)

Like Katherine, I'll have to keep my eye out. I'd love a look at the book. And probably more important, I know someone who'd embrace it.

I hope your celebration filled your heart with love, laughter and light.