New House and an Old Pool

So we moved into this new home. It’s a nice place, built in 1970, so it’s not too old. I’ve owned older homes before. They are nice looking, but a myriad of nightmares as soon as you try to fix them up a bit. First of all, if the electricity hasn’t been updated, you’re in for problems with ungrounded two-prong outlets and not enough of ‘em. Then there’s the plumbing problems with lead pipes and corroded galvanized water lines. I’ve been there and done that. 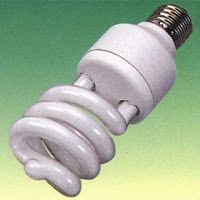 This place is okay in the old and decrepit department. Good water flow, plenty of grounded outlets. The lighting could be a bit better, so I have been working on installing some fixtures. 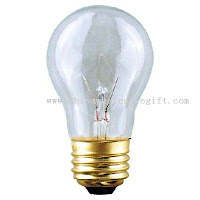 I already did the stairway to the lower level and put spots up over the kitchen sink. I had to do away with the glass globe bug gathering relics that were there. I do have a bit of a dilemma though. The newest environmental phase has everyone using the fluorescent screw in bulbs to replace the regular standard base incandescence bulbs. I can’t see shit with the light they cast. If I buy a higher wattage, what will I be accomplishing?


I thought I would install some track lighting in the kitchen and use small spots directed onto specific work areas, but I just went with under cabinet lights instead to save some bucks and accomplish the same goal, that is, to be able to see the blade of the knife so I don't cut fingertips into the pasta salad. They draw less than the standard 60 watts, and cast a better light for my old tired eyes. I have a window over the sink, so daytime chores there don’t need any lighting at all other than the natural. 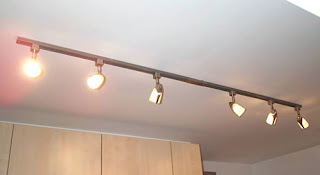 A few other small projects are in the works. I will paint two bedrooms. 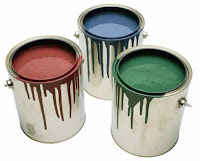 They are both a greenish color and are faded. The master had a border wallpaper applique’ that my daughter removed for us. She seemed to know what she was doing and had experience, so I let her have at it. I’ll prep for paint with a few small nail and shade mounting holes that need some spackle.I’ll paint without the aid of masking tape. I’ll “cut in” around the windows and baseboards and along the ceiling. The ceilings look like they’re in great shape, so I’ll leave them alone. The folks we bought the home from must have been non smokers!


The big job is in the back yard. This place came with an above ground swimming pool. It is 24 feet across and four feet high. It was filled with water. Some kind of cushioning pillow is used, along with a cover, and the water freezes during winter, but doesn’t damage the sidewalls as it draws to the center, attracted to the cushion. It was mostly thawed out when I uncovered it and started the draining process. 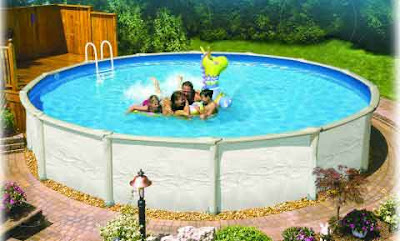 You see, I’m draining the pool because I’m getting rid of it. I went on Craigslist to post a notice telling the general public that I would give the pool away free to anyone that would come and dismantle it and haul it away. I didn’t have to put the ad in as I found an ad requesting just the opposite.

Let me mention here that I just don’t want one of these big monstrosities in my yard. They are expensive to keep up with chemicals and electricity to circulate the water through filters. Then there are the filter elements themselves and all the skimming and covering and uncovering. Then there is the panic factor. Some folks don’t worry about such things, but the hypervigilence in me will have me on the edge of my seat anytime any of my Grandkids get close to the back yard! There are plenty of lakes to swim in as well as the YMCA. By the way, our "Y" has a water slide! They can cool off in the yard under the garden sprinkler. There is a nice gentle slope for a Slip-n’-Slide too.

A young unemployed father was wanting a pool so he could stay home with the children this summer as the spouse worked. Whatever. He wanted a pool. I had one. Done deal. Right? Wrong!

I took a few pictures showing this man that the pool held water and had a good liner. All the circulating pumps and filters were there and in the house, taken off before freeze up and stored. I then started the process to drain the water. When I uncovered the pool, there were still large Titanic sized ice chunks floating, but they soon melted away with the influx of some warm Spring weather we’ve had. I went to the local store and rented a small 1/2 hp transfer pump and hooked it up to a garden hose. 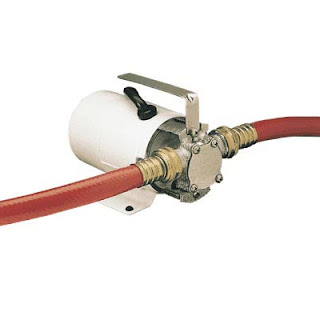 Let’s see, 2 gallons per minute times 60 minutes, that’s 120 gallons per hour times 20 hours is 2400 gallons. That ought to do it, right? Wrong again! This thing holds almost twelve thousand gallons of water. That means over 100 hours of a constant running pump. I know this to be true because I went HERE!

It was super slow, and leaves kept getting caught in the intake end of the hose. I had to find another way. I hauled the circulating filter pump assembly out of the house, where it had been stored for the Winter, and rigged up a series of hoses and pumped it out that way. That worked fine, but the same leaves clogged up the filter and needed to be emptied often. I tried a screen on the intake end, but then it slowed the flow from that end. The leaves had gathered in the pool the previous Fall, before the previous owners covered the pool. Every time I had to clean the leaves out of the filter, I also had to reprime the pump and that was a chore, especially as the water level got lower and I had to reach over the edge farther and farther each time. 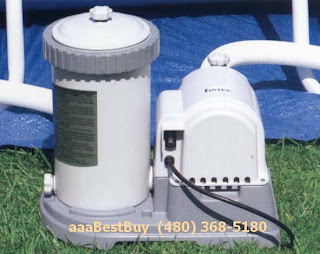 It took all day, but I got the job done. It took many trips into the yard and a lot of bending over and tugging here and pulling there. It tired me out and gave me some sore muscles. Wish I had a hot tub instead of a pool filled with cold water. Oh, that’s right, the pool is empty now. The guy is coming Wednesday morning to take it down, piece by piece, screw by screw.

I called the guy and told him the water was drained and it was ready to be taken down and hauled away. He asked me if I’d be around to give him a hand. I hope that goes well. The whole purpose of giving it away was to have some enthusiastic grateful recipient come over with their friends and their tools and disassemble the thing and haul it away. If I knew I would have to do any work, I would have sold the damn thing. I guess I’m just an old softy. But I sure don’t see myself working as hard as I did to drain the darn thing. I’m beat up, tired, sore and basically a wreck. No way I’m on up and down off a step ladder today painting the bedrooms.

So, the guy showed up, he had his screw gun and he went right to work. I supplied a few Ziplocs for the screws and some assistance, but for the most part, I left him alone working on dismantling the swimming pool in my back yard.

The pool is gone now. Some landscaping to get done, but in a few weeks, there will be a nice big grassy area where the kids can play. 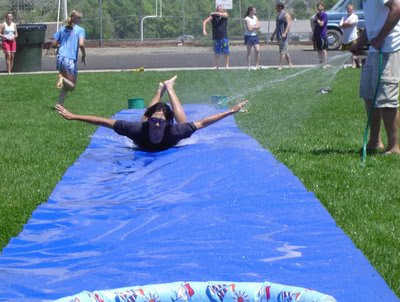 This will probably replace that old pool!

So, instead,of painting, I’ll cruise town and try out another coffee shop. Being a college town, the coffee shops abound. Haven’t found the right one yet, but still looking. For that matter, we have many choices for pizza as well as bars and taverns. I’ve been to one bar and one pizza place so far. The Mexican restaurant in town was very good and we’ve been there three times!
Posted by Spadoman at 9:44 AM

are you using eco friendly paint? :) just kidding. sounds like a pain in the arse with the pool. what a waste of water- in general. we have at least 3 good pools here- city run pools- and a few park pools in the neighborhoods- as well as the ymca having a good pool. hell, i never even had a slip and slide- i used the neighbor's :) we had the sprinkler.

Awwwwww....what kindly thing. Seems your heart was in the right place--and that's an awesome thing. Don't let the work involved damper (no pun intended) the plans in progress.

I'm ALL about painting! I love colors and change and lighting.

LOL! I've got two of those nasty, bug collecting globe lights in my kitchen!:) Couldn't convince the landlord to switch them out when they remodelled the interior of the house. Ah well, at least we've got good natural light, so they're not on a lot.

Congrats for getting rid of that toxic chemical collection unit out in your yard.:)

We had an above ground pool (inherited when we bought the place) when the kids were young. I just didn't see the point. The kids didn't like it much, and I was as hyper-vigilant as you! Sounds like you have had your work cut out for you. Your coffee is well-deserved!