The Real Reason behind the Crow Creek Ride 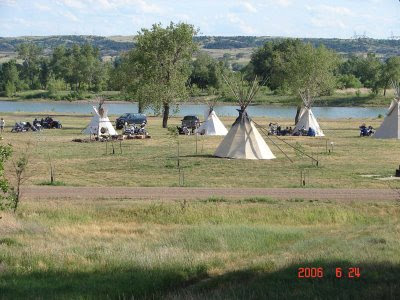 TeePees adorn the actual site of Fort Thompson along the Missouri River during the annual Crow Creek Commemorative Ride.

The Youtube that appears on this post will explain a lot about why I spend time and energy doing fundraising and working for the success of the Crow Creek Longriders annual motorcycle ride. It really explains why I ride at all. Incidentally, this years ride will take place on June 17-20, 2009. You can get more information at our blog, which we use as a website. Here’s the link:

The video is eight minutes long. The original footage was over two hours, but it has been shortened to give you a glimpse of just one of the problems the people of Crow Creek face. This video is about the local power company and is simply a documentary of power company employees taking out electric meters and shutting off power to residents of Crow Creek in the middle of Winter.

As you may know, the winter is cold out there on the plains of South Dakota. Many people believe it is the law that power cannot be turned off in the middle of winter. This has not been the case at Crow Creek.

Note: The above excerpt was taken from a WIKIPEDIA search about Buffalo County, SD.


The Crow Creek Reservation itself has an 80% unemployment rate. 80%! Hard to pay your heating bills when there is no work, no hope for work, no prospects and no investments in the community where you live.

I know there are those among the population that have an opinion about how the Native American should be living. Joining White society and moving off the reservation to a city where they can get work. Then there are those that think Indian people all get money doled out by the bucketful from the government or from casino gambling and spend it on alcohol.

The fact remains that the Power Company was only doing its job and they had a right to do it for non payment of services, but the extent with which they charge for shutting off and then turning back on the power is unethical and seems to be made as such a policy to render the people totally helpless, not to mention the laws that state power cannot be turned off during the months of winter in some cases where elderly, infants or sick people are concerned.

These things are true of all races and cultures across America and in the world. But all poor people are not degenerate drunks. And the “dole” that is supposedly given to Native Americans isn’t what you think. This article by the US Department of the Interior will quell any misconceptions about how much money the government is handing out to Native Americans.

Another myth is that all Indian people are rich from money they get from casino gambling. Only 40% of all recognized tribes have casinos. All Indian gaming casinos are not profitable at the same level. And each tribal counsel has the authority to use money generated from casino gambling as they see fit. The Indian Casino is not the end all and be all for poverty for the people of Crow Creek at all.

Peter Lendkeek, the man who filmed and narrated the footage as he followed the power company employees around during the winter of 2008, is a friend of mine. He is instrumental as a liaison between our group in Saint Paul, MN and Fort Thompson, SD where Crow Creek Reservation is located. He is dedicated and honest. It’s not too often you can witness a nationally distributed Youtube video and you know the author personally. I know the stories depicted here are true.

The Crow Creek motorcycle ride I participate in every June raises money for two youth programs in Crow Creek. The Boys and Girls Club and Project Head Start. We are in our fourth year and growing slowly. Our hope is to raise money, but more importantly, awareness about the poverty and critical survival situation on the Crow Creek Reservation.

The CAN-DO.ORG organization is helping with this immediate problem of people getting their power shut off in the middle of winter. I like CAN-DO. Their Mission Statement describes that they attempt to take care of problems at the local level and will go anywhere in the world to help solve a problem where humanity suffers. Here’s their website and a story about what they are doing at Crow Creek:
Can-Do.ORG

What can we do? What should we do? I don’t know. Each person has to come to their own conclusion. There are many stories out there like this one. Many poverty stricken cultures throughout the world. Why concentrate on just one? Why this one? Again, I don’t have a clue. For me, it was the opportunity to take part in an event that I enjoy, motorcycling, and have fun with other riders while doing a good deed for others. I like the idea of actually seeing what we’re doing and experiencing first hand the people who tell us we gave them hope or made them proud that someone remembered them.

If you do go to our site, I ask you to click on the link on the right on our main blog page where it mentions merchandise. Consider buying a T-shirt or a pin and help us support our cause. Or make a donation to the Crow Creek Longriders. I assure you, every cent goes to the programs mentioned above. We have no one getting any money from what we collect.

If you are a Facebook user, please join our group, Friends of Crow Creek. It is simply a way to get numbers of people so we, as group, can be counted in the future and donations from corporations and advertisers will be forthcoming

Lastly, remember people like these people in your thoughts and prayers. In your daily reflections. Send your positive energy out to them and to all who suffer. It’s hard to live as most of us do, with nutritious food on our tables and our opportunities for a better way of living, and think of places like Crow Creek as we go about our daily business. I’ve been there. I’ve seen it. I know Peter Lendkeek and believe his truths. The camera didn’t lie.

Peace to all of you and all you hold dear.
Posted by Spadoman at 1:05 AM