Matters of the Heart

We meet here on Fridays and share our lives along with our souls. See more of Haiku My Heart at Rebecca's recur mi corazon.

It does my heart good

By last count, the tally of motorcycles on the list that follows this post, I have owned over my lifetime. There are sixteen bikes listed. A few of these I had stabled in one garage or another together and owned more than one at a time, but most were just stand alone bikes, that is, I owned one motorcycle and rode it.

I had that first one in 1970 when I lived with my folks in Westchester, IL. I bought it right after I got out of the army when I got home from Vietnam. I was riding to work the first day I had it and I slid down on a shady stretch of slick dew covered pavement when the car traveling in front of me hit their brakes hard in an attempt to avoid hitting a family of ducks that were crossing the road. I was an inexperienced rider and although I don’t remember the details, I was probably following too closely and/or riding too fast.

No one was hurt, not even the ducks. The jacket I was wearing, an olive drab green army field jacket, took a black asphalt stripe from the wrist to the elbow on my left arm and to this day, I have had trouble with that left shoulder. I reinjured that arm twice more in non automobile accidents over the years when I crashed snowmobiles, once hitting a log and another time hitting a large chuck of ice. Both of these motosport mishaps took place in the 1990’s. Oh yeah, there was also the time I rolled a Polaris ATV when I drove sideways on a steep hillside.

That last bike, the 2011 Triumph Bonneville, is what I was riding when an oncoming car came over the double yellow lines and forced me to the ditch last September on a quiet rural Wisconsin highway. That bike was a total loss from damage sustained in the wreck and I have not owned a motorcycle since that day, September 16, 2012.

That is, until last month. I briefly had money down on a new 2012 Triumph Bonneville, but decided not to follow through with the purchase and asked the dealer to refund my deposit. In fact, I had thought about not every buying another motorcycle and giving up riding bikes completely as I took into account the fact that I have severe heart matters that compromise my overall health.

I ended up thinking that I want to live until I die, not just be alive, and that getting out in the fresh air on a motorcycle is something that I don’t think I’ll ever lose the desire to do no matter what physical condition I’m in. As long as I can still do it, safely, I will ride motorcycles.

That “Safely” is a strong important word here. That means safely for myself, but more importantly, safely for others using the Nations highways and byways.

I had a friend tell me once, when I had an old Jeep that I rode up into the Black Range Mountains of New Mexico, that vehicles like that are “Death Traps”. He suggested a long time ago that it wasn’t safe to have such vehicles and ride them on or off road. I guess for that matter, with statistics showing almost 40,000 deaths on our highways every year, it is never totally “safe” to be in a vehicle of any kind. For that matter, no one is ever totally safe and no one gets out of here alive anyway!

I decided that 40,000 was a very small part of the 313 million people that live in the United States and that I would chance the odds.

Introducing the newest member of my stable, this 2009 Triumph Bonneville T-100. 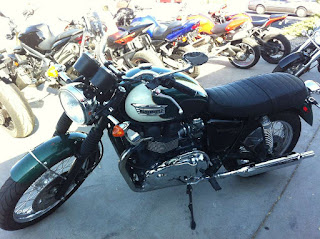 I’m scheduled to drive down to New Mexico in early April with my pickup truck and bring it home. Hopefully, this time frame will have me riding as soon as the snow melts and the roads are dry.

The Haiku I penned this morning speaks to the idea that I will ride again and my heart soars thinking about it.

Note: There has been an update to last week's Haiku My Heart with some explanation about my actions if care to wander back the the post below this one. Thanks.
Posted by Spadoman at 4:14 AM

Ride with the wind...with the abandon of Spring's morn....be safely guided by your Guardian Angel...feel the embrace of the Universe and celebrate another day of life! xo

Yup--you can feel the anticipation and joy.
It's a pretty thing, the zebra one! And with a little punkin orange sticker---LOLOL

Love your new green machine !
Ride it well, and safely, my wise Friend.
Here's to life living and loving !
Peace !

Holy crap! Your resume reads like Evel Knieval's! You gotta be careful out there buddy. It's not just death that's out there but serious injury that makes you wish for death.

Still, you gotta do what you love so may the force be with you! (The good side)

I'm just reading your bike story to my love, he's going to read it himself after breakfast, being a life-long biker! You are so right- you have to live till you die! I love your Grandfathers Sun, he's so warming just like you! Ms Foxy x

Motorcycles are not my thing but I admire your posts about them and your various road trips ~ Be safe.

"I want to live until I die" I need to think about that too. What an interesting collection of motorbikes! I can't ride a bike (zero sense of balance) but I've been wondering how would I do on a motorbike if I attempted to learn driving one.

Oh my! I don't have a bike but I'll think of you the next time I put the rag top down and feel the breeze in my hair! Ride on!

Joe,
Even though motorcycles scare the living daylights out of me, I totally and completely agree with your haiku and mindset. Riding is so obvoiously in your blood...why not do it as long as you want to, being responsible as you are, and all? Such a sober, yet inspiring piece for me this morning...always lovin' the 'live life to its fullest' theme! You should make your way into AZ and come meet me/visit Rebecca whe you pick it up! Otherwise, will we see you in San Miguel for Dia de los Muertos this year???

Ride, my friend, ride! And pen a few haiku along the way!

hello hello
joe !!
it must B bike week
here in my florida
as they are everywhere
up and down
US1 and A1A ...

i think of you
someday riding down here ...
who can really say ??

well i am all about LIVING life to the fullest! you are like a sun rising fiercely in its rightful sky!
rock on rider dude!

Hey Spadoman. Long time no see. Gee it's been a long winter. Many happy safe trails my friend! Anyhow, I know you've been real thoughtful about this new machine...looks really nice, the 2009 Triumph Bonneville T-100 Green. Now if we just get Barb some valium LOL. We're both sober people, we can laugh, no offense to anyone. Love to all at your hosienda Joe.

Congratulations Joe! I want to live doing the things I love the most... Here's to life, all of it!