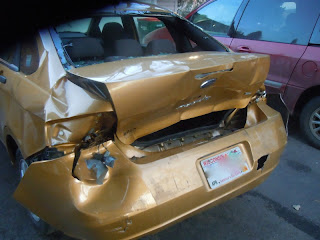 Goldie, our 2009 Ford Focus got rear ended while I was waiting for someone to cross the street at a Main Street River Falls crosswalk yesterday afternoon. 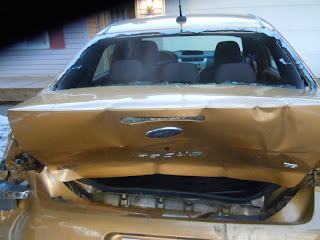 The vehicle that hit me was a huge Ford F-250 pickup truck driven by a young man. He had full coverage insurance. State Farm I think. You know, the Good Neighbor? 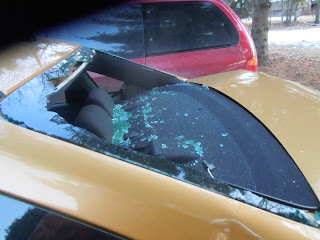 My daughter, the one that works in the auto body business, tells me it will no doubt be a total loss. 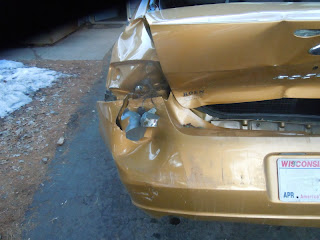 That's kinda good since I owed money on it and now it will be paid for. 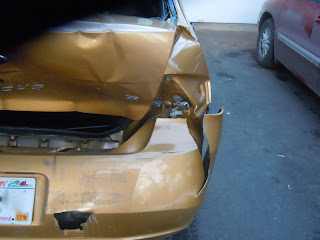 I also sold my Ford Pickup truck and now that is also paid for.

Now, I need to get another car. Just so happens that I made an agreement to purchase one yesterday just before the accident.

No one was hurt in the making of this post except the insurance companies pocketbooks. But they'll rip off the young man on his premiums and recoup their losses eventually. Too bad how that works. I have been on the other side of this equation a time or two in my past, I know.

Besides all the above mentioned excitement, I went to the VA and had an Echocardiogram of my heart. The functioning level has risen from a paltry 30% to 40% since I had the procedures done in late January. Before the heart episodes that started in late October 2011, my functioning level was 47%. (The normal healthy male is 58%). There is the possibility of even more improvement as time marches on. Here's hoping!

So glad that metal and plastic took the brunt of the hurt in all this !
New cars are fun !(Though payments suck !;0) As of January when my 11 year old Jeep hit the heap, I am driving a "new to me" Nissan 2010 Rogue and I love it.
A 30 or 40% increase may seem paltry but at least it is going in the right direction...
Sending more light, love and peace to that great heart of yours!

Was the echocardiogram before or after? Let's hope you keep improving.

Now, as far as the insurance company goes - my husband would be trying to get as much out of them as possible - he wouldn't take their 3rd offer any more than their 1st. But I totally understand if you aren't made of the same stuff - besides our son, I've met no one as tenacious as him. Just do some homework on the car and unless they are really generous, ask for more.

Glad you are OK, getting rearended can shake the whole body up a bit.
I like your charitable attitude towards the young man, like you said, we have all been there.

I echo what Jeannie said-- that's the game- they will try to come up with a fast & low ball offer- check in hand- if you sign off ASAP.

We had several go arounds- my husband was rear ended-- twice by the same car!
It was on the freeway-- dark/wet/ and heading into a congested zone, the husband eased up, but the 2 vehicles behind him did not.
An old lady in a brand new Camry rear ended his Corolla, and then the Ford behind her hit her car into his car a 2nd time.

He had whiplash. Anyway the insurance people rushed the whole thing- they were to provide us w a rental vehicle-- but wanted to hurry up and pay, so no more rental vehicle before we actually found a car.
The Camry AAA insurance tried to blame the entire thing on car #3-- but in fact there were 2 distinct hits.
It was in Nov, so we were literally left out in the freezing cold to try to find another vehicle.

I swear, there are so many drivers that don't look further than the bumper in front of them.
Also, I have been in situations where I am yielding to a pedestrian crossing, and some
dipstick behind me is laying on the horn for me to move it (really, should I mow down the pedestrian to meet your honking demand?)

FYI it may take a day or 2 to feel whiplash. So be looking out for that. You might need chiropractic, or other medical care, so if you are feeling pain/stiffness get it checked out. It is up to the other ins to pick up the tab entirely.
There is no grey zone as to who is at fault if you were fully stopped when the rear ending happened.

I hope they don't try to play the not totaled card.

The thing to counter with that, is there can be frame structure damage, so you won't accept anything less. When they started to play hardball, we mentioned the idea of talking with our lawyer, and suddenly, things changed & they were more willing to negotiate.

Funny how that works, the "L" word.

Essentially you need to tell them what amount you will accept, not the other way around.

Glad no one got hurt & the new rig looks nice.
New new or newsed?

Your ticker did not need this episode, but you are making progress, see it a a small victory.
Headed in the right direction is a good thing, yes?

Great news about your heart! And wonderful how all the car parts worked out : ) I'm so glad no-one was hurt.

Well, lemme focus on the positive. No one was critically injured in this episode (but I agree -- and HOPE you go checked out cuz whiplash isn't fun). You'll get a new vehicle..this will be fun! You have a good report on progress that you're making. Wow--10% since late January.....that's really promising and I'll hope for more of that!
That's LOTS of good stuff.

I am, however, sorry for the loss of Goldie. She served you well.

Yay for the heart report!! Boo on Goldie's loss...but, it is good that no one got hurt. The young man, I'm sure is emotionally traumatized from totaling someone's car and will also be economically traumatized too.
Love your new Mazda. Does that 18" clearance underneath? Lately, that's all I think about as I want something that I can go off-roading with in the hinterlands with. One can dream...

wellll
you know me,
i see signs Everywhere i turn...

{{ all these near misses
going on here
i do wonder
what it is you are meant
to be doing
with your Precious Life. }}

hummmmm...
maybe you are doing It now;
will stay turned to see...

oh my!
glad you are SAFE! and love the news of your heart! look out SPRING, i see a road trip on your bright horizon!

Poor Goldie looks so wounded that I'm surprised to hear that you are OK. But, I'm grateful for that. That truck is what my grandson drives and I wouldn't want to tangle with it. So, what will you do about another car given the latest news? Maybe a Jeep like you said in your Haiku post?

I'm very glad to know you're okay after that experience. Poor Goldie was looking very sad indeed; the new car is nice and looks reliable.

It's also excellent to know your heart is getting back up to speed. Spring is on the way never mind the fact that in so many places winter never quite happened other than cold and dark.