Shadow Shot Sunday is such fun. I can't even get through a day without seeing something that I think would make a great Shadow Shot. Check it out for yourself. Go to Hey Harriet and see more great Shadow Shots and find out how you can participate.

I tell you, it has become an obsession. I can't get through the course of a day without seeing something where I don't make the comment, "That would be a cool shadow shot!"

Problem is, this past week we've had no sun!

So, I dug through the photo archives and found these two unique photos. They were taken while on a trip out to the West coast on a family vacation we took in 2009. Twenty Two days on the road, 13 states and never had to yell at the kids once! Well, maybe once, but that's all! 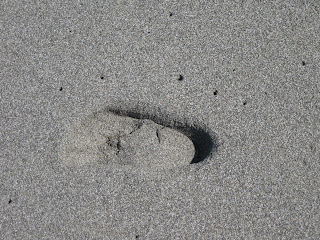 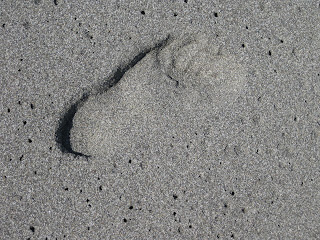 I call them Yin and Yang. How one is deeply set into the sand and the other is inverted and raised above the surface is beyond me, but there they are, and both with a bit of shadow to prove it. Seems like even the air bubbles from the clam holes have shadows!

We don't have any plans for any kind of epic traveling vacation this coming Summer. We'll make some shorter trips and I'm sure we'll get to some beaches, but none will be like watching the Grandkids playing on the Northern California coast like we did in 2009.

Hope everyone has a great week and that the shadows start appearing for us here way up North in Wisconsin USA.

What a gorgeous beach!! I love beaches like this one, never get enough of them! Looks like fun watching the grandkids and sounds like a really fun trip! Thank you as always for your visits and comments! They are much appreciated! Hope you and your family have a lovely and Happy Easter weekend!

Unique indeed! I love the mystique of footprints in the sand! Lovely photos!

My Shadows, have a happy Easter!

Even in shadow, where there is no light,
One may take comfort and one may delight
That darkness has lost its power to thrall
Those who are living on this earthly ball.

22 days on the road and no yelling? I'm impressed! They must be very good well-behaved kids! A super set of shadow feet! I'm curious about how one is raised...some kind of weird magic going on there! Love it! Fingers crossed the sun shines for you this week :)

I love feet shots too, and can't resist them on lovely beaches. Summer holidays - there's nothing like enjoying them with children - when they behave! Hope you get some great shadows this week. Sue

22 days and no yelling is almost as unique as the photos of the footprints.

Happy Easter to you, sir.

It has been quite dreary here in the north. I can hardly wait for more sun for more shadows.

Great photos!
The footprint stands proud in the photo because the person who left it was light on his feet, possibly lighthearted too….

Have a good week, Boonie

Fascinating! I'm glad you thought to preserve these footprints.

Extraordinary! Lovely shadows - I can see what you mean about the clams.

Have a glorious day!!

What wonderful footprints in the sand! Yes, shadow shots are addictive - my husband regularly points them out to me, and my son emails them to me!!

Hey Mr. Spadoman
You've gotten not only shadows but reflections and footprints too. a lovely tranquil photo on the beach. great eye for those shadows! I hope you get some sunshine in the northern parts of the state. (It really isn't much better down here). have a great week.

I had to stop bye to wish you happy Easter ....if you don't celebrate Easter that's ok, I still wish you a great weekend.
I love your photos and what wonderful memories they bring you. My first grandchild is not yet eight weeks old, she is a gorgeous wee bundle - you show me that we have wonderful times ahead.
Best wishes always.

It's the lighting, I think that makes it look like its popping up. I noticed the same phenom with petroglyphs. When I photographed them, I knew they were inversions. Then looking at them on the screen, they look raised!
Those are cool shots!

good morning joe!
i am hopeful our paths will cross at the cabin on the lake. imagine the stories we can share fireside.

come on over, this morning i am singing the praises of gemma!
i know you will be met with beauty.