Many of you know about the reason for my trip to Clarks Hill, South Carolina every November. For those of you that don’t, you can reference back to these previously posted stories about my visits there in 2007 and 2008. I didn’t make it in 2009, but I did return this year. It was wonderful to see my friends again, and enjoy the home cooking. 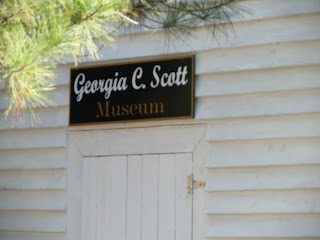 Mrs. Scott, who just celebrated her 94th birthday, has opened a museum. It is housed in the old school house on the property of the Bethany Baptist Church in Clarks Hill. What an appropriate place to read and see history but in an old historic building. Mrs. Scott has assembled the history of this parish and school in a simple way, yet so much about life then and now is evident within such a small space. The building itself cannot be but  16 X 20 feet. 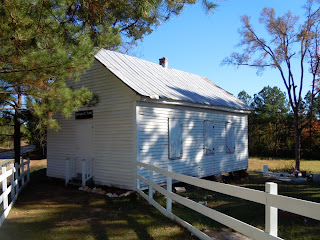 In this museum, she reflects her life as a child, a school girl, her college years, as a teacher and now, as the matriarch of this community. Photos of every past reverend at Bethany, the sister churches built and operated around the region to spread the word of the Gospel to others. She honors the Veterans of the community. Relics from the old church and school, including the worn wooden benches that were used by her parents.


She tells us of how she picked cotton, and her parents and Grandparents picked cotton. She has a great display about quilt patterns that were used as code by the slaves and how these codes would aid in escape. More about the Underground Railroad and the use of these codes at this fabulous web site on Black history.


The trip itself, driving down to South Carolina from Wisconsin, was accomplished in a couple of days. The little Ford Focus we have gets great gas mileage. Since we have a manual, or stick shift, we get 40 mpg on a regular basis. Imagine how thrilled we were when we found gas prices down South to be thirty cents less per gallon than back home.


A highlight of the drive down was a trip through The Great Smoky Mountain National Forest and National Park in Eastern Tennessee and North Carolina. We also drove a section of the Blue Ridge Parkway. The skies were sunny and the temperature was warm enough for us to have the windows rolled down somewhat, but there was snow on the ground high in the Smokies, as these photos will attest. Many of the trees were still in their best Autumn form. It was a beautiful day for a drive through some very scenic countryside.


The first day, we drove about 800 miles, all on the Interstate, and covered that in a little more than twelve hours. The second day was leisurely by contrast. We did the same on the way home, a long day of driving followed by a shorter day through some great Ohio countryside, a North South corridor from Interstate 70 to Cleveland, along Ohio Highway 83.

On our road trips, we always look for thrift stores and good food. We knew there was good BBQ in South Carolina and Mutz BBQ in the small town of Greer was where we whetted that particular appetite. I had the rib and pulled pork all-you-can-eat special. 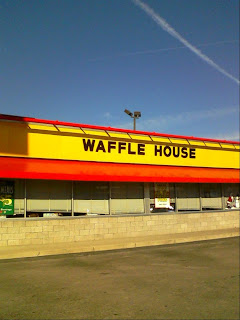 A few weeks ago, I was watching the Food Network and saw this special about fried chicken in a place called Barberton, Ohio. Since our journey home took us from Clarks Hill, SC, near Augusta, GA North towards the Cleveland area, we saw that Barberton was on the way. We scheduled the drive to stop and try this so-called world famous chicken. We were pretty much disappointed. The chicken tasted okay, but it was nothing special. I’ve had chicken just as good from our local  grocery store deli department. The pieces were small, and it seems that the notoriety from the TV spot had the prices high for what was put on the plate. Here’s the Food Network story alongside a picture of what my plate looked like. We ate at a place called The White House. They finished second in the TV show. Maybe we should have tried number one!

We did Waffle House a couple of times for breakfast, but in rural central Illinois, we stopped in at a place called Grubsteakers. At first, we thought it a bar and didn’t know if we should try it. When we got closer and saw the restaurant part of the place, I pulled in without hesitation. It was really good food. Good pancakes, and some of the best American fried breakfast spuds I’ve had anywhere and a good cup of coffee to go with ‘em. All this with great service.


That’s about it for our culinary adventure part of the trip. Of course the reason we go down to South Carolina every year around this time is no secret. It was great to visit old friends. My friend Frazier Dixon, who died in Vietnam in 1969, was born and raised in Clarks Hill, SC. We attended the Veterans Program again this year and also got to see Mrs. Scott’s museum. We talked with Anthony, Frazier’s best friend from his school days, and Shirley, his blood sister. Dan and Lois, his cousins were there and other Veteran friends from the Clarks Hill area, Sam and James. 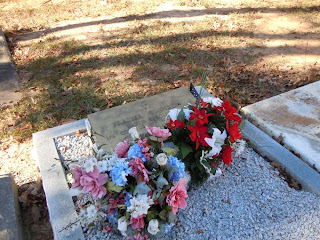 A few years ago, you may remember I participated in an event called The Longest Walk. I met many fabulous people on that walk and one of them lives near the Cleveland, OH area. Her name is Jen. On the walk, I found out that Jen was born in the same hospital as my daughter Maggie, and that her birth took place exactly one week previous to Maggie’s birth.


Jen had a baby 17 months ago. His name is Sam and I had never met him. The idea that we were on the road and had a chance to stop off near Cleveland had us heading that way after we left South Carolina. We got to see our friend and her Mom and meet Sam. It is such a great feeling to reconnect with friends while on the road.


All in all, it was a great trip. We drove in sunny warm weather all the way in both directions. The Focus ran admirably. We found numerous thrift stores and brought back treasures for the Grandkids. We got to see the museum and attend another Veterans program in Clarks Hill and place flowers on the grave of someone very dear to me. We presented the Clarks Hill community with a beautiful Star Quilt given to them by the community of my spiritual leader friend from Red Cliff, Wisconsin.


In the meantime, thanks for letting me bend your ear about my goings on. What’s new with you?

Have a peaceful day, everyday.

I do like the way you tell a story

(reading this made me really hungry!!)

Aha! I was just going to say the same. Had to go and grab a piece of cheese :)
Another lovely star quilt.
And Happy - is it day after? - Thanksgiving from me too.

I'm not hungry (omgosh--way too much food!) but I do agree that you tell the story well.

What a cute building for the museum--and what an honour to be a part of this family.

Oh--thrift stores and fun signs along the way. :-)
And chicken dinners.
And waffle houses!

k.....seriously in need of a roadtrip!

I hope your Thanksgiving has left you feeling 'full' in a number of ways.

As usual great photos and a great story.....you really do know how to weave them. What an interesting life you lead.

Peace, Spadoman. Haven't seen you about recently, tho' I did have a good look in all the local eateries. Glad all is well with you.

It's always relaxing and delightful to read about your travels and discoveries. Meeting and enjoying the company of friends along the way makes it even better.

I was so late posting my Shadow Shot this mornin'...mouse powered computer you know...but I'm back on track and heading off to work.

Love your trip shots, how sentimental you are and caring...and BTW...I LOVE fried chicken, I'm salivating as we speak...later dude!!!

I love these travelogues--some of my favorite posts. Finding the hidden gems: that's the ticket! Thanks for sharing your explorations and re-connections.