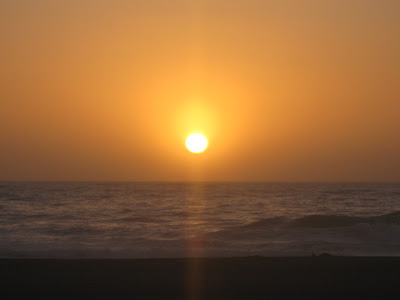 June 10, 2010 sunset at Centerville Beach on the Pacific

Part 2 of my trip was the time I spent out in California. Part 1 got me here, now I’m hanging out with friends and doing some riding. We also did a little work. My friend Hal is in the construction business and was building a deck. He was just about finished and wanted to complete the job before we left for some off road riding along the coast.

The day I arrived, he was at work, so I unloaded my motorcycle and took a spin. Since I used to live out that way, I am familiar with the surroundings. I just flat out took a ride over Tompkins Hill and into Eureka. I stopped for a cup of coffee at Has Beans, a coffee roasting company out in Shasta who also does business in Eureka.

I talked on the phone with a friend I met while on The Longest Walk II in 2008. She was living in the Bay Area when I met her, but now is student teaching in Arcata, CA, not far from Eureka. We talked and made plans to get together for dinner the next evening. I returned back at my friend’s place and we caught each other up on what’s been going on in our live. The next day, I helped Hal work for a couple of hours and we finished the deck.

We took three rides while I was there. One included the Tigercat road to Petrolia and Honeydew, then South into the King’s Range. We crossed streams and traversed up and down hillsides. We rode along the coast at Cape Mendocino and ended up in Redway where we stopped and refreshed with a beverage at a local coffee shop. The rain had been falling right up until the time I got there. In all my years, IO don’t remember June being part of the rainy season, but it was this year, so the roads did have some ruts and muddy spots here and there. Luckily, it was windy and most exposed areas were drying out real good. The ride home took me through the ancient Redwood forests of the Humboldt County Redwoods. 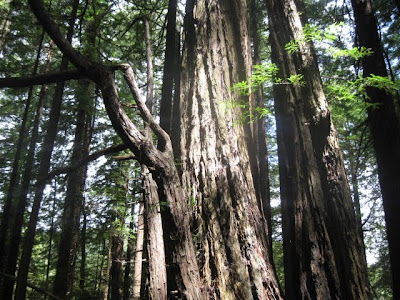 Hard to get a perspective from this picture of a redwood tree, but they are massive and worth the visit if you've never been there to see them in person. 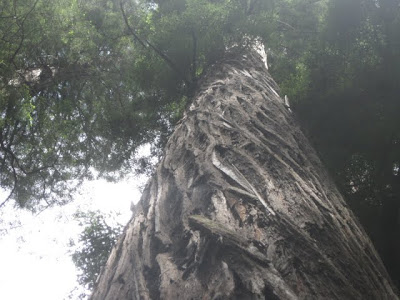 Like mountains in the forest, you have to look up.

The next day took us out East to visit a friend and up into the mountains at a gravel road called Redwood House. This connected with what seemed like endless dirt and gravel roads strewn with cattle who free-ranged in this neighborhood. We had very favorable road conditions and were really tearing up the gravel having a ball. We saw plenty of deer and wild turkeys along with the cows, and the hawks were flying all around up there in the mountains. The weather was perfect. No rain, cool and sunny. By the end of the day, our back tires were spitting out gravel and dirt as we powerslid around curves. Reminded us of our late teen years in the black dirt and coal tailing hills of Illinois.

On day three of riding, we went East again, this time to do a loop and climb to Black Lassic, an inactive volcanic mountain. We got up into the elevation and snow covered the road and impeded our path. We had to return to where we started and go around the mountain on another side that wasn’t quite so high an elevation to get by the snow. We did around 175 miles this day and saw some beautiful country. 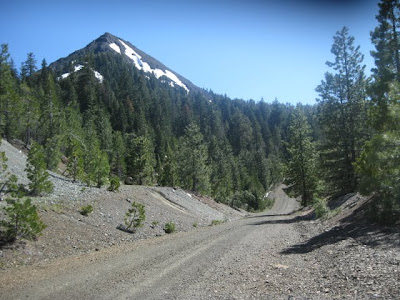 This is Black Lassic. We never made it to the summit as snow covered the road in the higher elevations and we were stopped in our tracks.

We also saw some of the aftermath of the logging industry. Closed lumber mills, rows of trucks sitting idle and bare spots on the sides and atop mountains from the helicopter logging practices. The silt that ran off from the clear cuts choked the streams and creeks which led to the salmon not being able to find their spawning grounds, henceforth killing that industry right along with the logging. 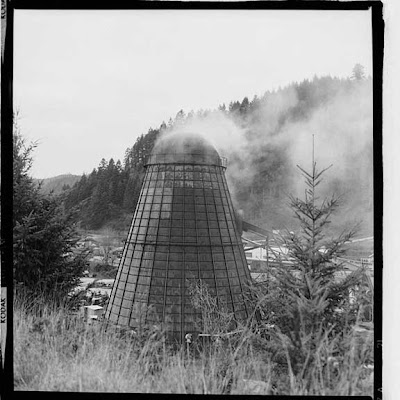 A stock photo of a slash burner in use during the olden days of the logging industry. These structures are all around and stand as rusted hulks these days. They were used to contain the ash and cinders from starting a forest fire as they burned the slash, or unused residue from the logging.

It was a good day of riding though. On the way home, we ran into a fog bank that brought with it temperatures that were at least 20 degrees cooler than those in the mountains. We stopped and donned cold weather gear and rode back to the coast. We had dinner at a small local micro brewery called The Eel River Brewery who say they are first brewery in America to be organically certified. Good brew here to be sure! 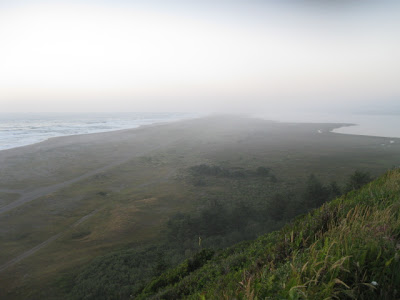 This is the South Jetty as it looks from the top of Table Bluff. This spit of land is six miles long and ends at the Southern opening to Humboldt Bay at Eureka, CA

The next day was a rest day from riding, but I did go out and see my friends Tony and Cheryl who live near Carlotta. It was bright and sunny this particular day and I had a great visit with them. They live right in a grove of redwood trees. These are the people we stayed with last year when we took the Grandkids out West. I spent the remainder of the day packing my stuff and getting ready to load the bikes to head out towards Oregon's Outback for more riding in the high desert. I also went down to the ocean and picked up some driftwood that I'll use in an art project. I took some spectacular shots of the sunset. It was one of those days that nature allowed me a great view of the late afternoon show. 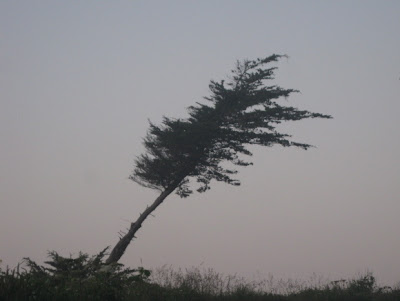 A lone tree that has been windblown for years. It's stance reflects the battering from the winds off the ocean.

Hal changed his mind the next morning and I ended up loading just my bike for the trek home. There was some thought given to going up to Oregon and then on to the Clearwater National Forest in Idaho and doing some riding on my way home, but since I was going to be alone and not with my friend as originally planned, I just headed out for Wisconsin.

So far, I had some great fun. All the riding I did on the coast was great, but we never did do a full tilt GS ride with camp outs and other bikes along in a group. And I did get to ride the Nevada desert and mountains, but I did that alone. I did have some disappointment, but I quickly got over it. I understand and respect my friends decision to hang back at home. At that point, the trip was over. I still had to get the bike, on the trailer, back home, so I just saddled up and headed that way.

Next, the last part of the journey. The trek home. I’ll leave you with photos and another YouTube from my time spent in California. The photos are from various parts of the time spent out on the coast and thew YouTube is shots through the redwoods from a camera I mounted on the engine guard frame, left side. 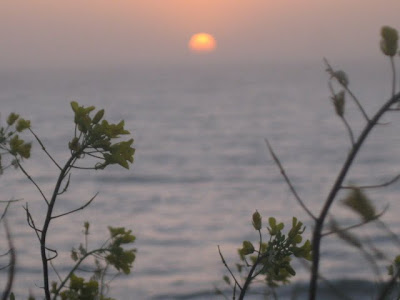 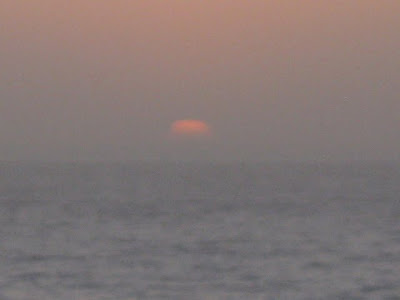 I've never been further north than Marin County - thanks for your fascinating insights into unknown lands.

thank you for taking me with you! i lived in the little town of mendocino for nine glorious years. heaven! the beauty of it filled my soul every single day.

left there for the mountains of prescott, only to be sure my son could grow up near his extended family.
i will never regret that in its richness of heart. the bonds forged have offered a life time of joy.
oh but i do miss my beloved mendocino so!

This bought back some memories of the year I spent a summer in CA, and in the last week went down the PH to Anaheim from San Fransisco, then back up inland going to see the giant Redwoods.
Happy days

Hi there, Joe. I'm just catching up with your posts. The photos are lovely and your narrative is such fun to read. I've not been to Black Lassic but it's on our list of "field trips". I'm glad you had such a good time out here!

Oh, what great fun riding with you through the redwoods. Gosh, how could you not love those roads.....oh, and the turning bridge--way cool.

What gorgeous sunset photos....and how very cool that you got gifted that.
Oregon or not--sounds like getting the time that you did was an absolute joy. Peaceful. Serene. Spiritual in its own right.

(secretly hoping for your haiku!)

Some years ago my husband drove us home from San Francisco on Rte 1. It was such an amazingly beautiful drive I was awestruck most of the time from Marin Co to Eureka and onwards. I have a friend I met through the blog who lives in Eureka. She's sent me wonderful photos of her own and I do hope to see her there before we leave Portland. Your pictures and the story of your journey are inspiring as always.

Cool post! And to do it on a motorbike - even cooler! I've never been to that part of the world before so thank you for all the photos and the description of the places.

I do hope that all is well, sir.... I get a strange about silence in familiar, welcomed places.

Too bad you didn't make it to Mendo this trip. See you next time, Spadoman.

Thanks to all of you for stopping by the Round Circle.

There is one more part of my trip that I'll tell you about soon. Hope to see all of you again.