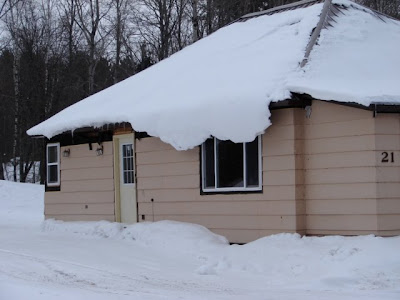 In the 90's, hot and humid today. Thought I'd post some snow so we don't forget what it looks like.

It’s Monday. I’ve had some discussions with my 10 year old Grandson. He says the week starts on Sunday. He may be correct, but my feeling is that they call Saturday and Sunday the weekend, then Monday starts a new one. At least that’s the way I think it, and live it. So today starts another chapter in the great adventure called life.

I’ve been sick and I will go to the doctor first thing Monday morning, or at least as soon as the clinic at the VA hospital opens, that should be around 7:30 a.m. After that, I need to get things packed up for a trip to Red Cliff Indian Reservation on the South shore of the Great Lake Superior. I’m leaving early Tuesday morning and would like to be all packed and ready to depart by 6:15 a.m.

I’ll be setting up my camp space there. Tent, shade canopy with screened walls. Cooking gear with stove and lawn chairs. The event is simply to help out while a vision quest ceremony is going to be conducted. I am not going to do the vision quest myself, but my feeling is that since I will be up there as a helper and supporter, there will not be any way that I won’t be thinking about having a vision and what my friend, as a participant, will be going through.

They will spend time alone, four days, and they will fast. As a helper, I don’t have to fast, but I’ll be there alone. There are other helpers there that I’m sure I’ll have some contact with, but generally, it will be a quiet place. I plan on eating light and doing a semi-fast and try to experience some of what my friend will be going through. I was asked to be there, in the camp, as a helper and supporter. They will need help tending the fire which will be lit and kept aflame until Saturday at the conclusion of the ceremony.

Thursday brings a full moon. It will be a joy to sit at the fire overnight while the moon dances overhead. If it’s cloudy, I’ll see a brightened sky, if it’s clear, I’ll see the tips of the ripples of the beautiful powerful lake glisten in the moonlight. I’ll return late in the evening on Saturday back to my home and dismantle all the camping gear, just to get ready to pack it all up again as I leave for another trip on Friday June 4th.

I’ll tell you about that trip in a separate post. It involves motorcycles and a long journey. A journey I’ve been looking forward to for a while now. I sure hope this sick feeling goes away. But there have been other happenings here at Spadoville.

On Tuesday last, my sister drove up and spent a couple of days visiting. The purpose of her visit was to be here when my cousin, who I haven’t really seen or talked to in about 37 years, was going to be passing through my neck of the woods. When attending the funeral services for my Mother, my cousin showed up. We reconnected immediately and talked about how we’ve been spending our lives.

She tells me that a couple of times each summer, her and her husband drive up to Minnesota from their home in Central Illinois to go fishing. They rent a cabin and spend a week or two there. Of course they pass right by where I have been living for the most of the past 36 years. (We moved Up North from the Chicago area in August of 1974).

On this trip, they will call and plan on staying in a motel close by River Falls. They did so, and we got together and had dinner out, then came back to my house and looked at old photographs and some really old home movies that were put on a DVD. We had a copy of that DVD and we watched, together. We laughed and cried. We told stories back and forth. What one would forget, the other remembered. We filled in blank spots for each other with names and places and dates and events.

How cute we were. How cute we are! How fat, how skinny, how short or long our hair and how outrageous our hairstyles, (and beards and mustaches). Many shots of Grandma and Grandpa. The good old days when movie cameras were a novelty and people stood as if in a portrait and waved instead of standing still. The rabbit ears flashed over the heads of unsuspecting cousins. The laughter and the gestures of, “Go away, I don’t want you to point that thing at me.”

A wonderful evening spent with relatives. A rekindled relationship that was interrupted by raising a family and living life. We made a promise to get together again soon, and invited other cousins to be there as well. This will take place at the end of June when we have the mini cousins reunion at my sister’s place when I return from my motorcycle adventure.

I’m posting just a few pictures from that time long ago. These photos, and many more like them, were dug up when my sister started going through our Mother’s stuff. Boxes and boxes of memorabilia. These shots are of my Paternal Grandmother, my Mom and Dad when Dad served in the Army in 1943 and my Dad’s Mom and Dad with their children which are my Dad and his brothers. 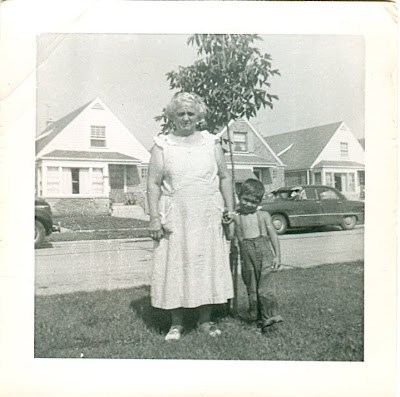 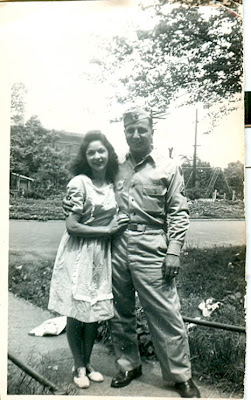 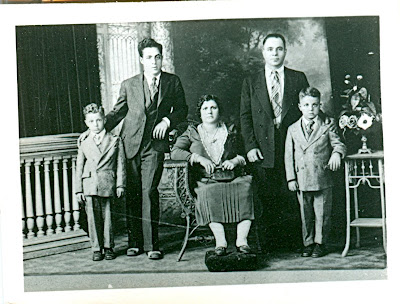 Grandma, (seated), and Grandpa, (standing on right) with Uncle Tom, (standing), Uncle Joe, (at left) and my Dad, Frank, (on right). Absent is my Aunt Angie who wasn't born yet. This makes up my Dad's family.

So that’s it. Just wanted to share that with you all. If the doctor has anything significant to tell me, I’ll let you know. I’m sure I’ll be there all day since I don’t have a scheduled appointment. It’ll be sign in and wait for triage, then, depending on the severity of the ailment, being sent to a clinic to see a doctor. I hate to tax the system, but my symptoms have been lingering on for a week and frankly, I’m a bit worried.

UPDATE: Just returned from the doctor. I felt much better this morning, but went to the doctor anyway. He concluded that I have had a virus and that it is in its last stages and all should be fine. That’s good news, and I do feel better, so, I’ll proceed as planned and leave early in the morning tomorrow.

In the meantime. Take care and be well. I’ll return over the Memorial Day weekend and pay homage to our Brothers and Sisters who serve and the families that have given the ultimate sacrifice in the loss of a loved one.

Oh my gosh....you're so lucky to have the photos you have. And to have the family members to connect with.

Safe journey, sir.
I'll look forward to hearing about the campsite, the events and the full moon's magic.

(and I'm gladder than glad that you're feeling better!)

I see you, my friend! I'm happy to find you (reasonably) well and happy! I'm back a bit and will be checking in to catch up. Please stop by and see our family's new blessing, Elinore Irene. Remember not to eat too lightly while you sit in contemplative support. It is my understanding that the vision seekers receive sustenance during their fast from the food and water that you take in. Many blessings!

So glad you're feeling better so you'll be able to enjoy the wonderful experience you have planned. I really envy you the opportunity to attend and help. Hoping it goes well for you and your friend.

Happy that it was just a virus. Enjoying looking at your family pics and reading of your family gathering.

Thank goodness you were able to report that all is well with your health before you ended the post and headed out to help at the vision quest. You have such a rich and active life there are times when I truly envy you. The photographs and stories about your family and the reunion with your cousin are great. Happy trails to you, my friend.

i love they easy way you include us all in your journeys...your family.

i am so relieved to hear you are on the mend..
and now truly in the peace of quiet and the service of a friend.

you will return with stories to tell...
and we will be here quietly waiting.

Glad to hear that your virus is clearing up and that you get to go on your vision quest. I've never been on one, but am told it is an amazing experience. Enjoy the quiet time.

Love the pics! oh and thanks for the reminder of snow. I still hate the extreme heat though.