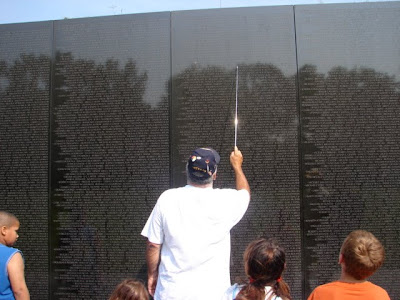 Memorial Day has so many meanings and events that take place throughout the country. At cemeterys, people gather and programs are held. Parades honoring soldiers. The furniture store in town is having a sale. All in honor of the Veterans who gave the ultimate sacrifice. One day, set aside. The soldiers die every day. Their relatives and friends grieve every day. Their children are parentless every day. They stand and fight every day. It is a shame that they are honored for just one day.

In the Native American community, things are a little different. Veterans are held in high esteem at all times. At each Pow Wow, a gathering of people in an extreme sense of community where drums beat, singers sing and dancers show their steps around the circle, Veterans are honored, not only at each Pow Wow, but each day of every Pow Wow. The flags are paraded into the circle and flown there. Each day starts with a flag ceremony. Veterans, both dead and alive are honored. The people prepare a feast and share this in the name of the Veterans. 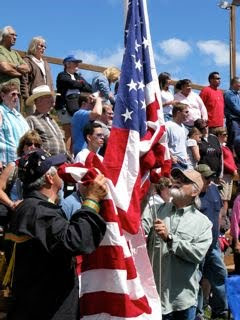 Raising the flag of a deceased Veteran at the Grand Portage Pow Wow. It is said that when flags are honored in this way, the Veteran is waving his last goodbye and saying Thank You to the people

Each year, at such a Pow Wow event, I attend and try to fly the flag of a Veteran I have known that has passed. The event is the Grand Portage Rendezvous Pow Wow which takes place on the Grand Portage Indian Reservation located in the farthest reaches of Northern Minnesota, right at the Canadian border along the shores of the Great Lake Superior.

This August, I will go there with other Veterans, friends of mine, and they will help man the flag poles. We'll raise and honor two flags this year. One for my Father, Frank Spado, and one for Mrs. Spadoman's Father, Edwin Mueller. Both of our Fathers were in the service during World War II. My dad in the US Army and Barb's dad in the Marine Corps. They didn't die in battle, but they served just the same. They are Veterans.

A couple of years ago, I took the flag of a friend of mine that did die on the field of battle. His name is Frazier T. Dixon. He was in my unit, the 2nd Battalion of the 22nd Infantry Regiment, part of the 25th Infantry Division. We were called the Triple Deuce. Frazier died in battle on the night of December 6th, 1969.

I made a video of the flag raising ceremony for my friend. It is long and YouTube won't allow me to print it here. But I'll watch it today. This is how I'll remember and memorialize our Veterans this year here at Round Circle for Memorial Day. But be sure, there isn't a day that passes in the life of a Warrior that Veterans aren't remembered and battles aren't relived in our minds. They are with us forever and become part of who we are. 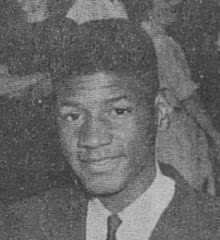 High school photo of my friend, Frazier T. Dixon of Clarks Hill, SC. Frazier gave the ultimate sacrifice of his life in The Republic of Vietnam, December 6, 1969

You see, once you are chosen to be a Warrior, you are a Warrior forever. Being a Warrior isn't just going off to do the bidding of society. It is staying sober, not beating your spouse, serving your community, serving the Elders and the Children, being honest and living a life where integrity means everything. Above all, a Warrior stands and is honored by the people when the people need to honor them. It's not about the Warrior, it is about service to the people.

"You've never lived until you've almost died. For those who fight for it, life has a special meaning the protected will never know."

Honor your Veterans every day. For whether or not you agree with any war, whether or not you support our government and their policies, whether ot not you pray to God or not, it is a fact that Warriors fight for your freedom and are willing to die for you, even when you hate them and blame them for the wars we fight in the name of our country. They do the bidding for society, for without the approval of society, there would be no war. They have given something of themselves.

In death, they gave the ultimate, in life, they have given their souls when they have had to kill another in societies name. Those that survive carry this with them for eternity.

Very moving, Spadoman, thank you. We have these ceremonies on November 11, the date of the First World War Armistice. Within the last year the last two remaining British servicemen from WWI died. I wonder if any of John J. Pershing's troops who served in France in 1917-18 are still with us?

These last few days have also seen commemorations of Dunkirk 70 years ago, when the Royal Navy aided by hundreds of small civilian boats, yachts, pleasure cruisers, fishing smacks etc. evacuated 335,000 British and French troops from the beaches of Northern France, an epic exploit that has lodged deep in the British consciousness.

I have such a hard time with wars, the Vietnam tragedy, our generations war, is something I have a hard time talking about without tears. My daughters father served and wrote me of the horrors, as with all wars...why can't we all just get along!!!

Getting ready to storm this Monday morning, thunder is a rum'blin', no strawberry pickin' for me, think I'll take it easy today. My brother had this virus too and took forever to shake.

I really enjoyed this post...you sound like a very honorable man, true to his brothers and sisters, if only all of us had more compassion for our neighbors, life would be grand(er). It was a beautiful full moon, wasn't it...have fun on your next venture and be safe!

thank you for this post.
how important it is to honor. to remember. to keep our loved ones alive in our memories.
to embrace life and live it fully straight from the heart for the gift it truly is.

I'm touched by the Native American ceremonies, Joe. Yes, our "warriors" should be honored every day ...just as there should not be just one day set aside for Mothers and Fathers. I despise war, but it's not the young men and women fighting who are responsible. I try to make it a point to always greet military personnel with a "thank you." Unfortunately, all war veterans are not recognizable by their clothing, or I would do the same for them.
On this Memorial Day ... thank YOU.

A beautiful tribute to all that have dies...you speak it so well

the circle of life

Wow-truly a moving post. I know you miss your friend today as much as you did when you first lost him in 1969. My husband's brother served in the Vietnam war. He is with us this weekend and what a treat it is to have him and his wife here. They went up to the Vietnam memorial in Angel Fire yesterday.

I think I was born a pacifist but I honor the memories of all who fought and died long before their natural times. Whether it's Memorial Day in May or Armistice Day in November the real point is that we understand war is no way to solve our differences and that we pray there will be no more.

Thank you all for stopping here, and thanks for your comments.

Christopher... November 11 is Veterans Day here in the USA. Used to be Armistice Day, but they changed it. Similar to Memorial Day in scope, but a separate meaning in the heart to me.
Remembering my history somewhat, I know of Dunkirk.

Sweet Repose... Sharon, I have a hard time with war as well. Prayers aren't enough to heal the wounds of all affected. Thank you for the fine compliments, you are very kind.

rebecca.. thanks for being here and saying a few things. It means a lot to hear from people on days such as these.

Shelly... Thanks for gracing these pages on Memorial Day. It's true. Veterans don't "advertise" that they are Veterans. At least you are aware when you do recognizea Veteran. Thanks for that. And you are perfectly correct about the Mothers and Fathers!

View... Thanks for stopping by. Yes, I like the reference to the flags waving too. It adds some meaning to why we fly them, and it makes sense.


Stephanie... Peace dear woman. The circle, yes. It all comes back around, so we strive for good.

Paula... Thanks for coming here. I'll check out Angel Fire at some point. There is also a memorial in T or C.

susan.. Thanks so much for stopping by. Glad you are a friend and glad you are a pacifist. Most peaceful people know the true cost of agression, that's why we want it to stop!

Thank you all again.

What a powerful tradition. What an honourable thing.
I envy their beliefs and their ceremonies.
What a grand thing to partake in, to be a part of....

Thank you--for the wonderfully moving piece and for being a Warrior.

Mel... Thanks so much for visiting here, and for yoiur very kind comments. You're the best!