Everybody has to eat, right? And some are more adventurous than others when it comes to eating. I’m one of those people, and along with Mrs. Spadoman on any kind of trip, whether it be to the Twin Cities to the “big” thrift store or on a 5000 mile road trip like we did the first two weeks of July, we wonder where our next meal will be.

Let me tell you, “We’re not fussy eaters”, but the kind of place we try to find when traversing territory strange to us far far from home is so important to us that we’ll skip a meal rather than accept dining at someplace we just don’t like the looks of. All chain corporate franchises are out of the question and never considered.

Of course we carry a couple of bags of assorted tidbits of food, condiments and essential utensils along with a well-stocked cooler that ices down plenty of fruit, veggies, cheese, cold water from the Lake Superior springs and the hallowed half-and-half for our coffee, but at least one meal, taken in a place that hopefully satisfies the adventurous spirit while traveling, is always on our daily agenda.

We had several great scores on this recent trip. Some good places across the breadth of the journey. Places like The Starlite Cafe in Vale, Oregon and the Tall Town Cafe in Lakeview, OR will receive honorable mentions as places we’d definitely go to again. In this group are also Gills By the Bay in Eureka CA. and the Montana Coffee Traders coffee shop in Whitefish are definitely on the ‘mention’ list as well.

The top places, which I will review individually in due time are The Dragonfly Cafe in Salmo, BC, The Owl Spirit Cafe in Port Townsend, WA and Ma Mosa’s in Grants Pass, Oregon. In the meantime, let me tell you about our experience at a seafood dining establishment we found to our liking in Victoria, British Columbia, called Nautical Nellies.
Nautical Nellies was billed as the best restaurant in British Columbia and seemed to be a famous and expensive seafood restaurant in the bustling downtown of Victoria proper.

Here, at this link,is a gallery of photos of their fare from their website. I’ve included a few photos that I took as we had a late afternoon/early evening dinner that included deviled eggs, with blue crab and proscuitto, as an appetizer along with the raw oysters on the half shell that only I succumbed to.

Incidentally, one of my reader friends used the word, if it is a word at all, “Gak”, when I mentioned raw oysters. I don’t think it’s a word but rather a guttural sound made from the back of the throat. The same one I get when I smell curry. But I have no “Gak” reaction to raw oysters, well chilled, on ice, served with lemon, horseradish and my choice of five different kinds of Tabasco brand Louisiana Hot Sauce.

Mrs. Spadoman enjoyed a “small plate”. It was called the “Bag O’ Doughnuts” which included Crab, Lobster and Shrimp Fritters. These were all battered and deep fried and served in a small brown paper lunch bag that had the uppermost part of it torn off so the diner wouldn’t have to stick their hand too far into the bag to retrieve the delicate seafood morsels.

Prior to the Bag ‘O Doughnuts, she opted for the French Onion Soup that was to die for, or so I was told. It certainly had a beautiful presentation and looked like a fountain exploding from the vessel it was served in.

I had the West Coast Paella which included Halibut, Salmon, Scallops, Shrimp, Bistro Prawns, Chorizo sausage with peppers and onions, all with a spicy creole rice topped with Mussels. That is a mouthful, literally and figuratively., and it was delicious!

Of course, I lubed up with a couple of Vodka Martinis since I wasn’t going to be driving. Nautical Nellies is right next to the Black Ball Ferry dock on the inward harbor where we would catch the evening ferry to Port Angeles, Washington later that day. 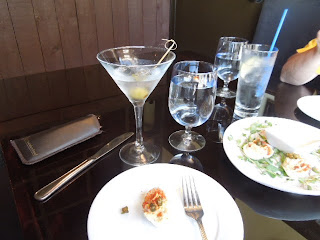 The waitstaff were neat and orderly and very friendly. As much time as was needed was taken with our choices, including comments about who was in the kitchen on this particular day and if that chef does one dish or the other exceptionally well. It might have been lip service, but we enjoyed the conversation and tipped handsomely for the time spent with us.

Besides, here we are in Canada and the waiter was from Ohio. It was the Fourth of July and we all mentioned the peacefulness born to us by the lack of fireworks in the “foreign” country. Of course that was over after our evening ferry ride to Port Angeles, where at dark, when the ship arrived in the American Port, the blasts and colorful displays occurred for a few hours and were seen clearly in all directions from the second story balcony of the Flagstone Motel.

I’d return to Nautical Nellies. It was expensive, but we were on vacation and sometimes expenses and extravagances like this are not only unavoidable, but mandatory.

Next, breakfast somewhere along the journey.

I've enjoyed raw oysters when I've had the opportunity - with lime and hot sauce mmmmm. I'm frankly jealous of your meal. Well, everything but the deviled eggs anyway. I'll eat a deviled egg but I would never order them in a restaurant. In fact, it's such a homely item, I'm shocked it was on the menu. But then, maybe a lot of people don't make them any more and they have become "special". I'm sure they were zooted up with yummy extras grandma never thought to use.

What a wonderful adventure. And with food reviews [always a Skippy favorite y'know!]

I think if I made blue crab and prosciutto devilled eggs for Pooldad he would quit work and just worship at my kitchen table. Those look and sound amazing.

And I am with Mrs. Spado. Gorgeous onion soup and I want me some "Bag o' Doughnits" hee.

...k... Forgive me cuz I am soooo not a "foodie", which is probably just as well given they scripted "gluten free" for me. LOL. I'm the one who starts fanning herself if the food starts touching!! I would adore the adventure, smile at the "bit of heaven on a plate" and celebrate the pleasure of those around me. BUT, I would make the *gak* noise. LOL. Specially over the oysters. LOLOL. Ohhhh...but what a pretty Frech Onion Soup display! And how cute to serve the other in a little brown bag.

Great review Joe. Gak also happens to be a Star Trek Klingon term. Fresh Gak is a delicacy. It looks like live skinny octopus arms as I recall (definitely seafood like). I have always been violently allergic to all forms of shellfish (which Barb has no picked up as well as bad mango & soy sauce reactions). So we have to dial down our adventures. Keep the reviews coming but be sure to watch your blood sugar & other markers.

What a lovely meal given a wonderful review..