I’m feeling like I should explain a little about This Post I wrote along with the Haiku a few Fridays ago. Bear with me while I recall my motivation for such a somber piece. Let me be clear to tell you that I was not complaining about people not coming to my blog or not liking my stories. I was not calling for attention by telling people I am a Veteran of the American war in Vietnam, and I certainly wasn’t feeling sorry for myself, although melancholy and waxing nostalgically can certainly sound that way, especially when read on a gloomy day.

Thursday afternoon, a good friend stopped by. His name is Nick and he is 73 years old. I’m 63. So, here we are, a couple of old men in an old Ford Escort station wagon, driving around the county on rural roads. It was a warm day for January, temperatures in the 40’s. That fact, in and of itself, is a story as it is minus 14 as I sit here and write this.

Nick and I enjoy smoking a cigar now and then. In the Spring, Summer and Fall, we sit in the garage or near the fire pit outside and enjoy each others company and a cigar. Sometimes, we use the patio at the coffee shop in Pepin, WI. We would ride our motorcycles down there on very twisty curvy scenic township roads through the forest, along the streams and through the cultivated fields of corn.

Lately, Nick’s old Escort was in for some badly needed repairs. It wasn’t sure whether or not Nick’s car could be repaired. This was problematic as Nick , nor I, smoke cigars in our “good” cars. Those would be the later model vehicles that we keep and other members of our respective families use for their conveyance. Only the old “beater” is used for smoking forays, and I was without an old beater at this time.

Now this will change as I have been busy horse trading and will go to St. Paul and pick up an old beater of my own this Sunday. It’s a 1999 yellow Dodge 1/2 ton truck, perfect for such country excursions for the purpose of no purpose at all, except to loan to friends that need to haul something and/or are moving and to smoke a cigar.

Anyway, Nick and I were driving around in his resurrected Ford Escort and the conversation was flowing to all kinds of places. Nick is well versed and as rounded as anyone I know when it comes to personal experiences and adventures. We never run out of subjects and each of our personal vignettes from different periods of our lives has an adventure attached to it.

We were nearing the end of our ride and we had just stopped at a brand new Flying J truck stop that had opened up along Interstate 94 near Roberts, WI at Exit 10. We both could swear that truck stop wasn’t there a week ago and that it was built, up and running and open for business, in what seemed like, overnight!

As we got back on the road after leaving the Flying J, I started talking about how glad I was that I no longer had to drive over-the-road trucks to make a living. The conversation went on and I recalled a few very rare stories that I don’t even remember telling anyone about ever in my lifetime. Trucking stories, being on the road. The many miles over the years that I put on driving big rigs, criss-crossing the country.

I related to Nick that I don’t usually get asked about my experiences from my old truck driving days, or any other job I’ve had for that matter, then I told him about my Brother-In-Law asking me about Vietnam when I was in Chicago visiting my sister before Christmas.

The conversation drifted to this idea that people don’t know all the things someone has done in their lifetime when they look at them, and most people don’t just start telling others their life stories at the drop of a hat. It was agreed upon that that’s one of the reasons why these discussions never come up in general conversation.

I thought about this when I got home and wrote my Haiku poem for the Haiku My Heart project that I am involved in on almost every Friday.

So, today’s post is an explanation, and a short story from that cigar smoking session on that balmy day, spending time with Nick. Sharing the idea that when we see another human soul around us, at the coffee shop or a restaurant, at the grocery store or any outing, even glancing over at the person driving the car next to yours at a stop light, they all have lived a life and have a story to tell.

(As a side bar to the idea of a short story, the cigar brand I was smoking was an Arturo Fuente. Fuente was a premier Cuban cigar maker and made some of the most glorious cigars in Havana right about the same time that Earnest Hemmingway was living and writing in Cuba. As in most other things of this nature, cigars come in several shapes and sizes and use different types, colors and strengths of tobacco. Fuente has kept up the Hemmingway theme and has a line of cigar offerings called the Hemmingway series. One of these is labeled a "Hemmingway Short Story". It is short in length, a small cigar, and very satisfying. That is what I was smoking this day in Nick's Escort) 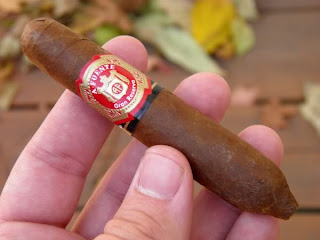 I would relish the idea of sitting down with a stranger, or with anyone, and spin yarns. Just get on a subject and see what is said. Bask in the images created in our minds from the words that are spoken. See the people, the landscape, the weather and feel the drama, laughter, pain and ecstasy of life. Too bad this couldn't happen outside on a shaded patio where I could smoke a cigar, and perhaps share a smoke with another storyteller, but the weather is too harsh for such enjoyment here in the Northland.

I think I will do some of this today and speak to a stranger at a coffee shop I haven’t been to before.

My husband enjoys a good cigar too! He can make it last for a day. the first part is when he walks the dog. Then when he goes out to light the barbeque and then finishes with a glass of red after dinner!!!
I so enjoyed reading this post...it is what we should enjoy in life, friends, stories, and a good cigar.
Fyi/ cigar storage
He soaks a paper towel in brandy and puts it in a container, then places wrapped cigars(also in paper towel) in container and puts a tight lid on. Smells pretty good!

*laughing* Even *I* enjoy a good cigar now and then. True. Not especially well received by those around me, but true nonetheless. (and I laughed at the term 'resurrected Ford Escort'....I soooo understand the choice to of picking the vehicle you're okay with smoking it in--I go for the patio every time cuz.....)
I'm hopeful the buzzy truck proves to be THE perfect 'go n' get' deal for you. Yellow's a HAPPY colour. Perfect!
And how DO they put those buildings up when we're sleeping?! Seriously. I mean, I know I wasn't getting out for a couple months--but whole businesses got dropped into place along with the customers?!

Joe
Good to hear the background. I do want to hear about your trucker stories someday so start queueing them up! Yoru talk to a stranger at the diner comment is also so true. Once Barb & I were in Venice & sat next to "Aldo" at a lunch restaurant. He was great and we were convinced that his stories were pure fabrications but amusing none the less until he started pulling out photos that could not have been photoshopped that confirmed his claims.

Keep being open and friendly.

my uncles who served in WWII and the Korean conflict (was it ever upped to war? I don't know) never shared anything about the war around me, and my mom's nickname for me was "Miss Probe". I would hope that they were able to share with each other. I would hope that if someone like you and your friend felt comfortable sharing such experiences with me that I would listen with a kind ear. bless you for having served in an extremely controversial war. I'm thankful for your service.