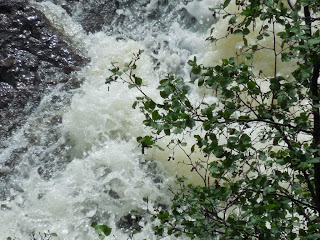 Wow, glad Memorial Day is over. That one is one of those emotional roller coaster days for me. Now I can go back to my every day thoughts. Seems pretty good to get back into my daily routine of being up and wide awake at three AM. I got through the day by staying busy, being surrounded by my loving family and had the good fortune of having friends visit Spadoville throughout the day.
In the meantime, I was thinking I need to tell you what else I've been up to over the past week or so. If you remember, my good friend Hal from California is visiting. We set up some studio space in my newly claimed downstairs living area and created a place to play and record music. The old members of the Dump and Shortcake Band got together, and along with Hal, we have laid down some tracks. We recorded some of our original stuff and covered a few tunes we all like to do. I'll post some of those music sessions in another post at another time.
For now, I'd like to show and tell you about our motorcycle trip into the Upper Peninsula of Michigan. Namely, we went to the end of the Keweenaw, that piece of land along the Southern shore that juts out into the big lake. Known as the U. P. for Upper Peninsula, the locals slang it to Yooper.

Our ride used state and county roads to get us from the far Western reaches of Wisconsin, where I live, to Michigan. We tried to take it easy and find some rustic and unique less traveled roads on our way there, but in anticipation of riding in the dirt, gravel and mud way up in the Keweenaw, we just ended up making a bee line.

We did get on a few out-of-the-way places, one being blowing right through a “Road Closed” sign on Gogebic County 519 and talking the construction workers into letting us pass over, around and through the work zone. They were pretty good about it. The foreman took one look at the knobby tires and all-terrain look of of our motorcycles and knew there wouldn't be much that would cause us not to make it.

After the work zone, we found a beautiful paved section that wound us to the South shore of Lake Superior and the town of Ontonagon. We spent the night there in Scott's Motel. A very clean and beautiful place. It was just a mile or so West of the town center. We ate dinner at a place called Syl’s Cafe and had one of the ethnic delicacies from that part of the world, a pasty.

The Pasty is the Cornish miner’s version of a hand held meal. A lot like a Mexican burrito or an Italian Stromboli. A delicious crust filled with beef, onions, potatoes and rutabaga. With all the copper mines that were the mainstay of the economy in the U.P., the Pasty still thrives.
The next day, we went through Houghton and stopped in Hancock for a fabulous breakfast at a place called Kaleva Cafe.


We arrived in Copper Harbor, which resides at the North end of US Highway 41, and secured a room at the King Copper Annex Motel by asking the cleaning lady, a wonderful soul named Dot, if we could ride for now and check in later. She wrote a note to Mary, the desk clerk, and told her to save a room for Joe and Hal. Quaint service for a tourist area.

With the peace of mind that we had lodging for the night, we headed for the end of the US 41 highway where the road turns into a dirt and gravel track. We went right to it and started putting our bikes through some mild abuse over mud holes, water crossings, large gravel boulders, sand, dirt and blown down tree branches.
We followed a small scale map and used a GPS as well as watched for any signs on the roads that were left over from when the trails were used as a roadway for snowmobiles. This area is a mecca for the snow machines with an average of well over 200 inches per year. This past Winter, with strange extremes throughout the land, Michigan’s UP only saw around 120 inches of snowfall.

Our goal was to find the path that took us to the far extreme Eastern point of the peninsula and a view of the Manitou Island lighthouse. Another friend told me to look for snowmobile trail marked as Trail 134. We did see some signs and followed a few gravel tracks that lead us to dead ends, water and mud holes so deep we didn’t dare try to traverse them and loops that had us going round and round in circles.

The return trip to Copper harbor and the promise of a hot shower and a good meal drove us. But first, we had to take care of our machines. We weren’t worried at all about cleaning the mud off of our fenders, after all, it was a badge of honor as these photos of my Scrambler can attest, but we did need gas.

The only gas station in Copper Harbor was closed. After some local inquiry, we found out that the family that owned the gas station was struggling with a series of illnesses in the family. The nearest gas was 16 miles away in Lac LaBelle. We had enough to get there and fill our tanks and headed out South on US 41, looking for the road that would lead us to the petrol.
When we got there and spotted the single lowly pump standing in a gravel driveway close to the lakeshore of the Lac LaBelle Lodge, Store and Rentals, they were closed. A walk around the property produced a woman that asked us if we needed gas. She told us that she’d turn on the pumps when she affirmed that we were indeed in search of the liquid gold.
Liquid gold indeed. Over $4.75 per gallon. Makes you feel totally violated when they gouge you like that. Captive audience I guess. No gas within 50 miles, so, jack up the price.
We filled up and rode back to Copper Harbor and the Mariner Restaurant and Bar for some evening sustenance. A short trip to the local grocery store for water and a snack to carry with us on the next days ride had us enjoying the lake shore view from our room through the sliding glass doors, which we kept open through the night.

The morning had produced some over night rain. That took the last of the mud from the trails off of the exposed surfaces of the bikes. It was time to head back South, but first, we planned to ride the gravel Mandan Loop one more time and take an alternative route towards home. My motorcycle failed to start and we ascertained that I had some sort of battery and/or charging system problem. We borrowed some jumper cables and got the bike started and running, with a new plan to get to a larger town and buy a set of cables in case they were needed on the ride back into Wisconsin.

We made it back to Hancock and remembered a large hardware store located next to the aforementioned Kaleva Cafe. We stopped in and ate breakfast there for the second time and bought a cheap set of jumper cables before we got back on the road.
We did use the cables numerous times on the way home as my motorcycle was not charging my battery. The system quit about 90 miles from home. I had Mrs. Spadoman bring me my spare battery from the workbench, dropped it in the bike and resumed the trip towards home. We decided to get home and abbreviated our trip with the promise of returning next year and ride even more of the dirt trails. The ones on the way there, on the way back and while we’re there as well.
We made it safely back to River Falls and my Scrambler is now in the shop being attended to so we can leave by the end of the week. Hal feels the need to return home and I will ride with him as far as the Utah/Colorado border. He’ll go it alone back to the Northern California coast from there. I’ll return home and wait for the next adventure and call this one a huge success.
I’ll leave you with this short 30 second YouTube of our motorcycles in action.  In the meantime, stay tuned, as there are more adventures to come.

so- this is why no loopy update :) looks like you are having way too much fun already this summer :) as always, if you ever make it as far as upstate new york- you are welcomed to visit betmoville :)

Uh, excuse me ma'am. That would be Batmoburg. Resides close to Cupphurst. I'll get there some day, and I'll write that loopy letter too, I promise. Thanks for the visit, you're the best!

i still have my morning cuppa but i will be having a better cuppa soon- i am being replaced at work soon...so very glad...

huh - something wouldn't let me watch your video! Glad you had a great trip. Sounds like you have acclimated to your pacemaker and are able to enjoy life again. ^5

Well, *I* got to watch the video....and laughed at myself as I was saying "wheeeeeee!!!" as the bikes splashed about.

Ohmygosh it's just gorgeous up there---and OHmygosh do you pay the queens ransom for gasoline, too. HOLY cow....guess it's the price ya pay for being there, huh?

I like the maid service/booking arrangements. LOL That was handy! And the views that Jack had. OH my....... Thank you so much for lugging the camera with you.
Wow......what a view.....

I'm gladder than glad that you got to do the ride and I'm hoping the fix for Jack isn't a spendy one so you can take off on that next adventure sooner!

The pictures and your story tell of a very delightful beginning to the summer. I'm so glad you're back in good health; you've always been in good spirits.