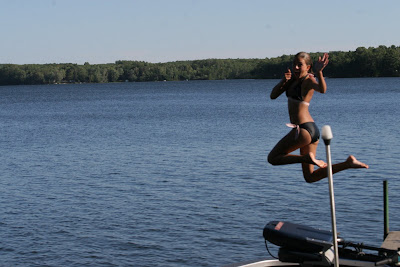 Sitting at the computer this morning, I glanced outside to see an overcast day. Not the sunny 75 degree affair the NOAA told us about last night. The weather forecast changes rapidly, especially the long term deal where they look at what will be happening, meteorologically speaking, for the next seven days. I take another look at the NOAA and see that the rain that was expected for the weekend, a slight chance, (20%), of precipitation is cancelled and there is going to be sunshine for the next week!

While on the motorcycle ride, I came up with a new way to look at the weather. I want to start a new trend in my own life and not say things like “Bad” or “Good” weather. It will be what it will be and I can do nothing to change it. I came away from the two weeks of riding actually liking the idea of riding in the rain. Not every mile of every day mind you, but that it is okay when it happens and I can enjoy it. So maybe some days I’ll have a little more of a challenge to do what I was planning to do. Say like Monday when I took the older two Grand kids and we went to fill water bottles with spring water up North near Solon Springs, WI. 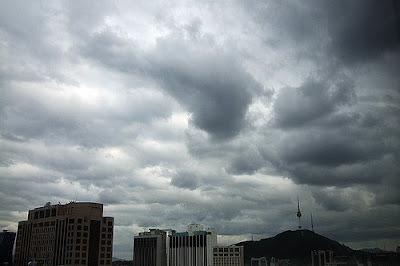 A cloudy overcast day was at hand on Monday here in the Northland.

The day was blustery and cloudy. Cool for a day late in June. These are the days that are usually hot in the morning and hotter later in the day with humidity enough to make you drip while standing in the shade of an old oak tree. But Monday was cool and windy and when we got to the spring nearby the Upper Lake St. Croix in Douglas County, the kids were bummed as they were hoping to take a swim. There is a boat launch and a picnic area and the spring is located right smack dab in the middle of the place. There is a sandy bottom and an area right next to the boat dock that looks like my Grand kids wouldn’t be the first ones to take a dip.

Anna flipped off her flip flops and waded out into the water. “It’s warm!”, she exclaimed.

The wind made the 65 degrees feel like 50 and the water, warmed from the sun of the days before, was warmer than the air temperature. DJ checked out this fact after he took off his shoes and socks and rolled up his pants legs. It was only a moment later when they decided that the weather be damned, they came with me to help out with the water bottles and go swimming. So they did. DJ went back to the van and changed into a bathing suit. Anna followed a millisecond later. 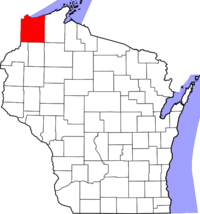 The map shows you just where Douglas County is in Wisconsin. I live about 100 miles South.

They frolicked around in the water and jumped off the boat dock after checking the depth of the water near the end. The wind blew and they stayed in the warm water instead of exposing themselves to the arctic like blasts. It started to rain a bit, just a drizzle. I moved to a vantage point under a large pine and saw the sappy pine tar dripping from a few places. Careful not to lean against the sticky life blood of the balsam, I stayed dry as the kids swam. The wind picked up and I started getting wet. I asked the kids to come on in and that the swimming period was over for this trip. They came in out of the water, shivering, grabbed their towels and headed for the van.

They changed into dry clothes and asked me to take them to Tremblay's candy store in nearby Hayward, WI, a tourist town filled with people from Chicago.

I hesitated an immediate answer, but didn’t say “No”.

I decided to take them and let them each fill a bag with candy treats as long as they also filled a bag for the other kids left at home. They certainly agreed and we took a route through forest and lakes that I sighted as a place to come back to and ride the motorcycle through the twisting curves and undulating rises and falls of the two lane.

After spending almost $40.00 on bags of candy, which included the biggest malted milk balls I’d ever seen that I bought for myself, we headed for home. The kids had helped me get the chore of filling water bottles done. These five gallon plastic containers weigh in at about 40 pounds when full. Since I had nine of them and more bottles and jugs of various sizes, I was counting on some kind of help from them to get them filled and loaded into the van. They came up with a real novel idea, on their own, and it was of the greatest of help for a tired old man like me. Watch the video and you’ll see how they managed to save me a lot of work. Our water bottles were filled, the kids had swam and we had spent valuable time together as a partial family.

The kids had no rules this day. They could talk about pee and poop all they wanted with no reprimand from Papa. They got to swim as they had hoped and go to a candy store and get whatever they wanted, including the three inch diameter jaw breaker that Anna started gnawing on as soon as she returned to the van. How could anyone say the weather or any part of this day was bad?

In my past, I dreamed of days like this. Me and the Grandkids, just hangin’ out, havin’ fun and playing. I was powerless for quite some time against doing such a simple pleasant task as this. The brain waves fought me at every turn. PTSD did that to me, made me think that way. And now, I was able to do it and rid myself of the anxiety and fear and just be alive and living in a moment, this moment, this wonderful moment, feeling loved and needed and wanted and worthy.

There is no bad weather.

This video is a little over seven minutes long. It is like watching a home movie. This one is from my home to yours and features a couple of my Grand children with voice over by yours truly. It also will show you some of Northern Wisconsin’s beautiful scenery. I hope you watch it.

Peace to you all, peace in your hearts and your lives. Peace all around you. And if it is hard to find or to see it, then the power and energy to make it be for yourselves.

30.5 on moving "Snelling Ave basement apt" Good to read of your trip, call when you get a chance.

Drew Danger... You are correct! I left one out. I must be senile or something. I'll call you soon. I promise.

By the way, I made a correction on the moving post in the comments section.

Barb said that we forgot that place because you lived there with us. And I do remember now that is when you first started working for the Crystal Reflections cabinet shop. Am I right?

Oh gosh--they are just too precious! Job well done--AND you had wonderful helpers.....who gave you an excuse to stop at the candy store. LOL

Thank you--it looked like it was one awesome adventure.

Great photo of the cloudiness, btw!

I grew up in a house much like those on the far shore overlooking a little lake in Ontario (where a lake 1.5x2 miles is considered small). It was fed by springs and artesian wells were common. Toronto grew over a lot of that countryside and I wonder sometimes if any of it's left. I know the lake is still there.

The kids are wonderful and the rolling method was an ingenious way of moving the heavy containers. As for rain and swimming? What could be more natural. Wet in wet is great.

Enjoyed a peek into your life very much, Joe. Thanks for letting us in.

*waving* at the man!

your piece here reminds me of a summer I spent in upstate NY, at the Finger Lakes. . . so many years ago now that I'd have been young enough to count as a grandkid

Drew... So good to talk with you last night. I promise to get out there for a visit, it's been too long my friend. Thanks for stopping in at Round Circle.

Mel... Thank you for spending time here. I appreciate your company. Next time, bring one of those Fairies with you. Bring the cute one!

Susan... Thanks for stopping by. There are so many lakes in Minnesota and Wisconsin, and then right up into Ontario. I lived in extreme Northern MN years ago and used Thunder Bay for our "City" shopping. Why didn't I know you were a Canuck?
You are right, wet in wet is natural. Especially at the lake! The kids did think of rolling the heavy bottles all by themselves and it did save me a lot of hard work that I shouldn't be doing anyway! Thanks again.

Crow... My pleasure. Sharing is only good when it is received by others as a gift. Your presense here made it so. Thank you.

I View......... I am honored to have you stop here. Have seen you at Mel's Fairyland often and am pleased that you stopped in.