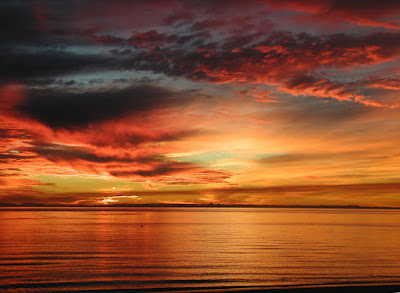 I miss seeing first hand the sunrise over the Great Lake Superior.


It’s Friday already. I was hoping to leave the last post up so folks can take a look at the neato video we shot while on a recent day trip up North. Oh well, I just mentioned it here, so go have a look if you want to, or if I’ve guilted you into it. I have no shame you know? And that’s a “Good” thing.

Speaking of “Good” things. I made a pledge to only post “Good” things on Fridays in honor of Only the Good Friday theme set forth by Shelly at This Eclectic Life. I think folks are reading it pretty regularly. I get a lot out of doing it as it puts a positive spin on things while writing it and while checking on the progress while it is posted.

I’ve had some “Good” things happen in the past few days. I was reading the comments on my blog post and found an entry from an old friend. He left me his number and asked me to call him and I did. Sure was great to connect. It has been over four years since we last talked. He is a younger man compared to my old salt. He was a boyfriend of one of my daughters. I think he wanted to be a boyfriend of two of my daughters!

Anyhoo:-), like my friend Batmo says, I talked with Drew, (his name is Andrew, but he likes to be called Drew Danger), and he is doing “Good”. It felt so “Good” to be remembered. Friendship is like that and is a “Good” thing. We mentioned the fact that even though we lost contact for a while, we can pick up right where we left off at any given moment.

Speaking of Batmo, or Betmo as she is usually known, she’s back from a trip to Puerto Rico. I e-mailed her and I want information about the food. I hope she had something good to eat that she can tell me about. A Latin recipe would be a “Good” thing. Maybe something hot and spicy to help break a sweat to keep me cool in these hot summer months.

Then again, it hasn’t been too hot around here this summer. Actually, not around anywhere I’ve been. That’s “Good” when it comes to the A/C running day and night and the subsequent electric bill, but the environment is changing rapidly and that’s not so good. I still want a new recipe. My blog friend Beth, over at Beth’s Blog, posts recipes regularly on her site. I’ve tried a few of them. I always wondered about starting a site with exchanges of recipes. I actually did start one a while ago, but I lost interest.

My idea was to write a story about making some dish, not just an ingredient list and instructions. I was telling about the trip to the store to fetch this or that to make the desired concoction. I had asked others to do the same. Maybe a concept that wasn’t ready in this time. That’s okay. I just cook and don’t write about it. It’s still “Good”.

That reminds me that going with the flow is a “Good” thing too. Accept what’s laid before you. Too much worry about the past is useless, after all, it is in the past and cannot be changed or altered in any way, shape or form. Worry about the future is useless as even though you may know what and how a situation might play out, there are so many things that can make it different, so why worry and stress. To keep my own self in a “Good” state of mind, I try to live in the now, so to speak, and do it One Day at a Time. Even One Moment at a Time if that makes it work better. That's how I stayed sane through the death of my old car. 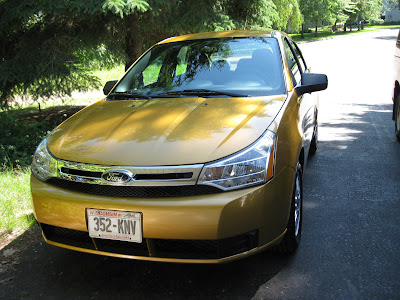 Goldie, the newest member of the Spadoville stable.

Yep, the 2000 Ford Focus died while I was away. I was hoping to wait a while before having to replace it, but we found ourselves in many situations where we needed reliable transportation, so we bought a new car. It's another Ford Focus. This one is gold in color and has a stick shift, (rare, I know), and that's what we had before. We wanted another manual tranny, better mileage I think. That's "Good" too. For the environment and for the pocketbook.

And that’s a “Good” thing. I hope you have a “Good” day today, and everyday. I hope peace finds you. I’ll send positive things out there. Grab them if you see them, they’ll be “Good”.

I like that you name your car. I guess mine would be 'blackie' :) Are you eligible for that gov't rebate for getting a newer car. Up to three grand I hear. I am thinking of getting a new vehicle. I really like those Honda CRV's. I hate SUV's but I am awful damn sick of driving behind them in my little CIVIC? So I am just thinking about it. Have a good Friday. I got the yard done today and now am getting ready to cook my contributions for tomorrows family cook out. I am making a pasta salad, a peach cobbler from scratch (so damned easy) and some short cakes - got some strawberries at the farmers market. Have a "Good" Friday.

Happy Good Friday, Joe, and have a great 4th!:) Sorry I haven't been around much.

Awwwww...pretty car. But WOW what a gorgeous sunrise. *happy sigh*

The Big Guy outdid Himself with that one!

good for you on the new car :) and no, i had only resort food. unfortunately.

Thank you all for stopping by here. I was gone since late Friday and just returned late last night.

Beth... We've always named our cars. My daughter names everything! Her toothbrush, her dishtowels, It's crazy! Thanks for coming by.

fjb... No worries mate. I know folks are busy and life is happening. We'll catch up when we can. Thanks for coming by.

Mel... You're the best and an inspiration. Thanks for gracing these pages.

Batmo... Thanks for coming by. After all, it was you that told me about the good friday thing when I saw it on your blog. Thanks for that too!

Queen Anne,,, By the time I saw this comment, the Fourth of July has passed and in the history books, (no pun intended, but should have been LOL). Thanks for the greeting and the visit to the Round Circle, and I hope you Fourth of July and everyday is a good one. Thanks.

I do hope you enjoyed your Independence Day, sir. And I hope it was a day filled with peace and loving.