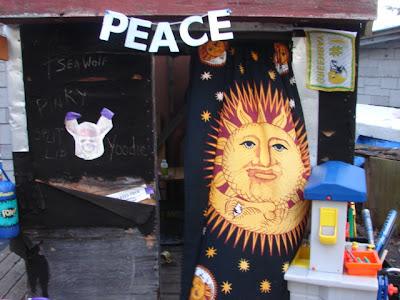 I'm in a musical kind of mood today, and as
you'll see, it has everything to do with that picture. Ever do that?
Have one of those days when you hear something and it reminds you of a
song. I even burst into song as if life was "Oklahoma". Some of the
folks at the Black Cat really get a kick out of it. Why just this
morning I heard someone talking and they said the word "pig". I started
to belt out the Bill Monroe classic Pig in a Pen.

Anyhoo:-), like my pal Batty Mo says, I got to thinkin' of some lyrics I wrote right about 'lecshun time. I looked at em' and added a few more lines.

You do the same. Add some lines if you want to in the comments. Let er' fly. Get mad, good and pissed off. The world, and I, are countin' on ya'll. You can do it. Sing what you write out loud. Sing the whole thing out loud. Make some noise.

Now put the beat to it and read it like you're on TV with Snoop Dog or someone like dat.

My name is Joe and I’m here to say that the politics is crazy in a messy way.

They don’t want peace, they can’t say love, the olive branch is missing like the mourning dove.

We gotta fight on, like we’re in the hunt. Our country’s losing ground on a lot of fronts.

Call up the man, tell em’what for, make sure you point em’ to the exit door.


Go to the polls, cast your lot. Change the direction of this angry pot
-full of haters, cheaters and the rest, put em’ in a sack and make em’ pass the test.

Try to get out of that sack in the lake. The fate of our country is what we have at stake.


We got a new batch, but nuthin’s on the table

We’ll throw em’ off a bridge

We’ll throw em’ out the door

We’ll tie em’ to the tracks for locomotive forty four


We gave em’ time, but They still have the killin’

We gave them votes, But they still ain’t willin’

Now write em’ a letter, Give em’ a shout

Stand in their hallway, Til they throw you out


Do it for peace, Call out or pray

Do something god dammit, Or you’ll die this way! 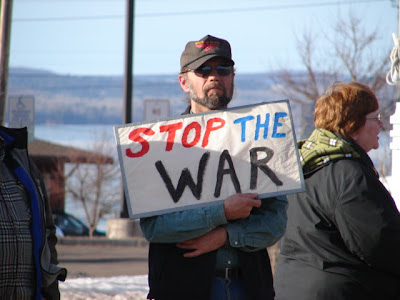 well, good lord! how could i improve on that? :) i know what you mean about running with a song- running on empty, running on....
and then it gets in your head- and it keeps running on....

i love the "old and in the way" version of pig in a pen. so much.
what a fun post, joe. music is a constant, thank goodness. hearing you belt out "oooooohhhaklahoma" would be quite something!

i love it joe!!!
i'd sing along, but i'm afraid i'd shatter your nerves (not to mention your eardrums) across all this distance...

You are more poetic than I could ever be....good job...Brought back many good hippy memories ;-)

Well, I love me some Bill Monroe, that's for sure. I guess my fav's are little Maggie, and Honey, you Don't Know My Mind.

"War! - huh- yeah-
What is it good for?
Absolutely nothing
Uh-huh

War! – huh – yeah-
What is it good for?
Absolutely nothing
Say it again y’all

War! – huh – good God
What is it good for?
Absolutely nothing
Listen to me…"

Isn't it strange how much it applies today? Have you ever checked out Unity08.com?