Phil, the Fitz and the Lake Shore 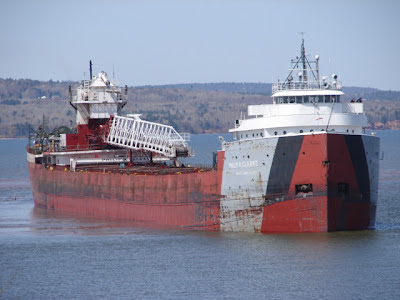 The ship Philip R. Clarke, part of the Great Lakes Fleet arrived in post at Ashland, Wisconsin on Friday, April 27, 2007 with a load of lumpcoal destined for for Xcel Energy power generating plant. The coal was out of Toledo. The ship will head for Two Harbors, Minnesota after unloading in Ashland, to pick up a load of taconite ore bound for Detroit, Michigan.

We don’t get many ships in port here any more. I don’t remember a one last season. The year before that, I think I saw one deliver coal. The water level is very low, the lowest in 80 years. A full twelve inches lower than last year. The Corps of Engineers claim that this will continue until September and even then, a rise of only 1-3 inches is expected.

The cause of the low water is drought. Dry conditions in the area. Many inland lakes are also at lower than normal water levels. Boating this seaon will be a nightmare for many. Those that make their living relying on water use may suffer economically. Boats may not be able to dock, swimmers won’t have safe beaches and in some cases, no beaches, on the Great Lake Superior and many other inland lakes here in Northern Wisconsin.

When I returned from doctors appointments in Duluth early Friday afternoon, the ship was just coming into the port. They are quite large, the Philip Clark is over 760 feet long. But when it was made in the 1950’s, it was only 647 feet in length. They cut it open and added a 220 foot section at Frazer Ship Yards in Superior. Now, at 767 feet, it is a very large vessel to be getting into Ashland. And although loaded with coal on this latest delivery here, it was not a full load as the draft of the ship, fully loaded, would have made it impossible to maneuver with the Water level of the lake at this historic low.

This ship was built as an order of three such ships made by the American Ship Building Company for the Pittsburg Steamship Company. One of the others was the Arthur M. Anderson. The Anderson was the ship that followed the Edmund Fitzgerald the night when the famous Gales of November brought her down and the lives of 29 crewmembers were lost, November 10, 1975.

So, who was Philip R. Clarke, and why did they name the ship after him? 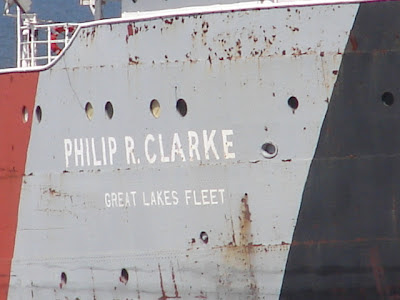 One night in 1994, when I lived in Duluth, MN, we saw that the Arthur M. Anderson would be coming into port around midnight. It was a late season arrival and the weather was cold by the lake shore. We bundled up and stood there and watched the lights come from the distance towards the harbor entrance. As we stood there and the giant ore boat slipped quietly past us into the harbor, we felt an eery surreal feeling as we knew the story of the Anderson and it’s history of the last people to hear Captain McSorely of the Edmund Fitzgerald say, “We are holding our own”. The Anderson followed the "Fitz" and had her in sight up until its fateful end, 15 miles short of Whitefish Bay, Michigan.

I know a woman who lost her Father in that shipwreck. The 'old cook' that Gordon Lightfoot mentions in his fabled song might be Allen G. Kalmon who was a steward/2nd cook aboard. His daughter is an artist and lives in Ashland and she is a good friend of mine. I think it be hard enough to lose your Dad. But harder still to have the anniversary remembered in the region every year, not to mention the haunting song made famous by Lightfoot.

While I haven’t lived right on the shore of the Great Lakes, as I do now, for quite some time, I was born in their shadow and have lived near them all my life. Born in Chicago and the Great Lake Michigan. Living in Two Harbors, Grand Marais and Duluth, Minnesota over the years, and close enough to be influenced by Lake Superior from a standpoint of weather and energy.

I remember once wanting a glimpse of a NorEaster storm. We went to the shore near Duluth and donned every bit of cold weather gear we had. We tried to look at the waves, but they were not to be seen from the literally blinding sideways falling snow and sleet. the wind taking our breath away and the impossible task of getting any closer to the lake for fear of a rogue wave taking us to the depths and certain death.

Although I don’t read as much as I could or sometimes think I should, I have made my way through many a ships log, fact finding investigation, non-fiction story and/or fictionalized version about the Edmund Fitzgerald and other great lakes ships and ship wrecks. Web sites abound about the Great Lakes and the toll of ships taken as the ocean vessel Captains will tell you that they’d much rather ply their trade on the ocean than on Superior.

In 2004, we attended the launch of the United States Coast Guard Cutter Alder at the Manitowoc Shipyards on the Menominee River in extreme Northeastern Wisconsin. This was quite the experience. Up close and personal with the ship as it lay in it’s crib, then watching it slide sideways into the river to start it’s service, replacing the Sundew, an older cutter harbored in Duluth. If you ever get a chance to watch a large ship be christened, do it. 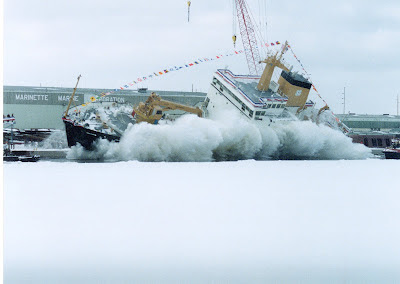 I guess watching that ship come into harbor in Ashland moved me as I thought of a former life or of a bygone era on the Great Lakes. Less than 50 ships remain from a fleet of over 350 in the 1950’s. A theme of my fictional writing is set on the waterfronts of the great lakes and includes a longshoreman, Joe Nighthawk, as the main character. A few chapters have been written. Some day I'll share them.

The lake changes everyday. Its color changes with the color of the sky. Its surface with the strength and direction or lack of the wind. The wrinkles change from the gulls and ducks flying across the waters and the pods of waterfowl dotted around in sight. The energy flows as the big lake cleanses itself of unwanted debris, the waves pushing old logs to the shore and scouring rocks into round edged nuggets.

Go to the water. Stand by its shore. Enjoy the pictures of the Philip R. Clarke.

That puff of black smoke is from the bow thruster used to get the ship exactly where they want it. Like parallel parking in downtown New York. 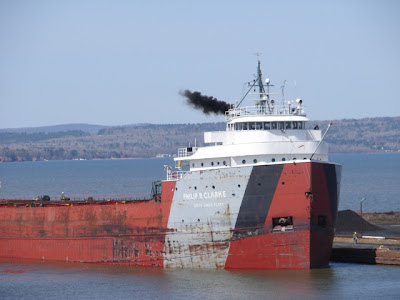 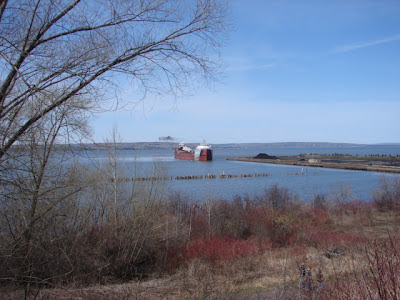 this reminds me of summers i spent on the st. lawrence river with my then bf's family. it is a main shipping lane and the big ships would go right up the middle- we were on the american side and you could look over into canada. it was cool. the wake would wash over to the dock and splash over it. those were the days- summertime with not a care in the world in a truly beautiful spot in the world. thanks for the memory :)

You tell a fine story, and I loved the pictures, too.. hope to dip in again soon. Thanks.

"Go to the water. Stand by its shore."

Wonderful post...I have heard before that many would rather take on the ocean than the Great Lakes.
It's sounds so very cold, I don't know if I could stand by the shore...

We've been back to Michigan twice in the last few years and saw several ships and took photos. I miss the Lakes and the ships.

An empty comment section is a sad thing, isn't it? Sorry I took a while to get here, but I got here.
Nice story.

Nice bit of history and fact here. You folks are a hardy bunch. Mention of the cold makes me shiver - too cold for this web footed Gulf Coaster.

I have watched several documentaries on the Lakes and one about the Fitz. A terrible tragedy as are all shipwrecks/sinkings.I have an unreasonable fear of deep water so sinkings are especially horrifying to me. When I went out with Husband and friends on a sea fishing expedition off the coast of western Australia (my Husband wanted a bill fish), I kept a close eye on the proximity of the tiny islets scattered about, estimating my chances of swimming that far in case the boat sank. Husband, ever the gallant, assured me that if I caught the ingoing tide I would merely float to shore. Small comfort.

Really great photos. Thank you for the little tour.